(ORDO NEWS) — Sealed since the time of the mighty pharaoh of Egypt , the cave was accidentally discovered by scientists in an Israeli national park. Untouched relics were also found in it.

Why the excavator worked in the National Park is not disclosed.

Archaeologists jokingly say that in the Middle East you can’t dig a hole without hitting some historical artifact. Evidence for this claim comes from the Palmachim Beach National Park in Israel.

However, in this case, excavators found more than one artifact. The workers realized that their excavator had uncovered the roof of a large cave filled with objects of archaeological interest. 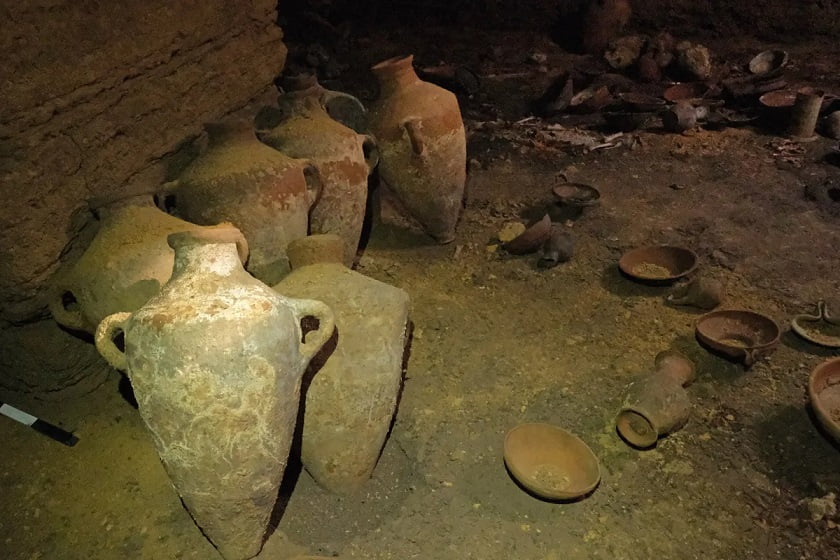 A study by the Israel Antiquities Authority (IAA) found that this room had been sealed for 3,300 years, since the reign of Ramses II.

Ramses II, often referred to as Ramses the Great, ruled an empire that stretched far beyond the Nile, including the Mediterranean coast and what is now Gaza, Israel, Lebanon, and part of Syria.

The items in the cave have remained untouched for millennia, despite the fact that the control of this place has changed countless times.

“A discovery like this happens once in a lifetime! It’s extremely rare to find an “Indiana Jones movie set” where the cave floor is lined with vessels intact for 3,300 years dating back to the Late Bronze Age, IAA’s Dr. Eli Yannay told IFLScience.

“The fact that the cave was sealed and not looted in later periods will allow us to use the modern scientific methods available today to extract a lot of information from artifacts and remains preserved on vessels, such as organic remains that are not visible to the naked eye.” Yannay said.

He then added that “The cave can give a complete picture of the burial customs of the Late Bronze Age.

Ramses II may have been so despotic towards his subjects that he is considered a candidate for the role of the biblical Pharaoh, who was subjected to ten plagues, but on the other hand, the stability of his reign facilitated trade.

Indeed, one of the greatest victories of Ramses was the victory over the pirates who plundered the Mediterranean shipping.

However, this story has an unexpected twist. Even though the cave survived three millennia and was not looted, some items from the cave were stolen between its discovery and the IAA assessment.

And this despite the fact that this place was guarded all the time. Now officials from the IAA are eager to return the stolen items.

IAA director Eli Escosido said: “The news of the discovery of the cave has spread like wildfire in the academic world and we have already received requests from many scientists to take part in the planned archaeological excavations.”