(ORDO NEWS) — Stone spheres have been found on the small island of Isla del Caño and in the Diquis Delta, where more than 300 stone spheres belonging to the Diquis culture have previously been discovered.

The Diquis culture originated in the Rio Grande de Terrabá valley, where they created complex social, economic, and political systems to govern their society.

During the Chiriqui period between 800 and 1500. AD large settlements grew up around the Terraba River and its main tributaries, in which large structures were built from rounded boulders, paved areas, burial places, round or rectangular barrows with stone walls.

During this period, the Diki reached the pinnacle of cultural development, with Diki artisans creating intricate ceramic, bone, and gold objects and placing stone spheres in important areas of the settlements.

Stone spheres were placed in public squares or along the approaches to the dwellings of the ruling elite or leaders.

Archaeologists from the National Institute of Anthropology and History (INAH) and the National Museum of Costa Rica (MNCR) have unearthed 6 stone spheres as part of a wider monument conservation project. 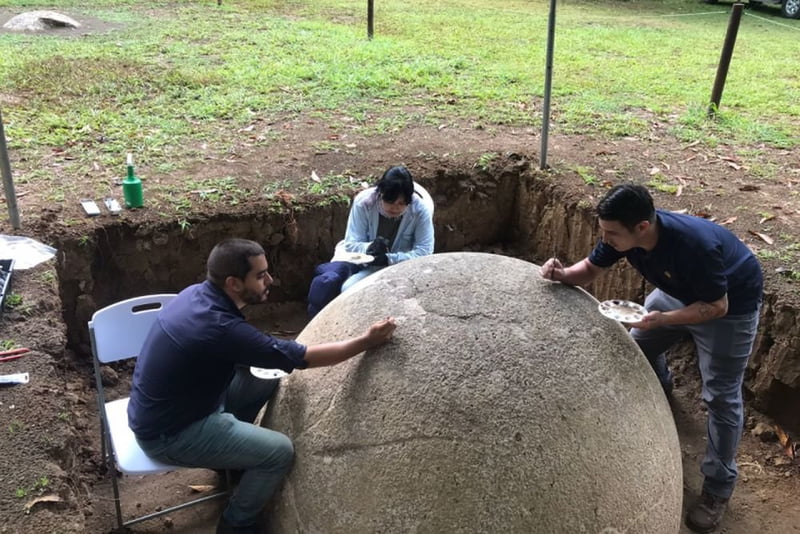 The team focused on the archaeological site Finca 6, located in Osa Canton in the province of Puntarenas, where stone spheres have collapsed due to changes caused by rock structure, damage caused by moisture, and flooding caused by hurricanes and tropical storms.

Isabelle Medina-Gonzalez of ENCRyM-INAH said: “The intervention included cleaning and stabilizing the surface by patching with enriched lime-sand mortar to slightly increase the hardness, as well as laying protective layers with mortar.”

The spheres were then reburied with layers of geotextile, gravel and sand. “We have found that this allows temperature and humidity to be homogenized, which avoids contact with the acidity of the clay soil and inhibits the growth of vegetation in the vicinity,” said MNCR’s Javier Fallas.