(ORDO NEWS) — Approximately two out of every three children aged one to four in the United States have been infected with the SARS-CoV-2 virus, according to a nationwide analysis1.

Infections in this age group increased more than any other during the Omicron wave, which the researchers believe is indicative of the high transmissibility of this variant.

The researchers looked for antibodies to COVID-19 in blood samples from more than 86,000 children under the age of 18, including about 6,100 children aged one to four.

Between December 2021 and February 2022, infections among the youngest children more than doubled, from 33% to 68%.

Although a small number of very young children were included in the analysis, the results are consistent with a rapid increase in reported infections in this age group, says Pamela Davis, physician and medical researcher at Case Western Reserve University in Cleveland, Ohio.

Overall, the researchers found that the majority of children aged 1 to 17 were likely to have been infected by February of this year.

Infection of children aged 5 to 11 years reached the highest level – 77%. Infection rates in children are higher than those seen in adults (see “Omicron Splash”). 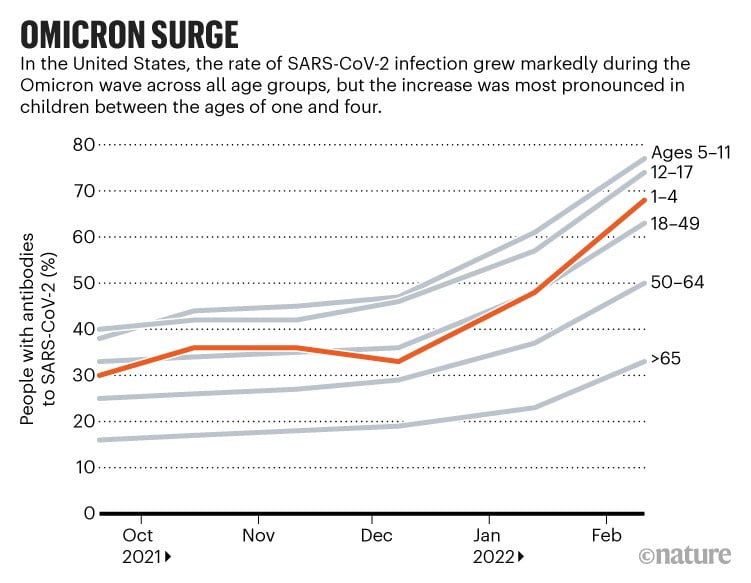 These are important findings, especially in low- and middle-income countries, where adult vaccination rates are low and children are likely to remain unvaccinated for some time to come, says Fiona Russell, a pediatrician and infectious disease epidemiologist at the University of Melbourne in Australia.

Immunity built up after an infection can help prevent future infections and serious illness in children, but “the pandemic will not end until children around the world are also vaccinated.”

Reported cases of COVID-19 in the United States indicate that about 17% of children under the age of 18 have been infected.

“This is just the tip of the iceberg,” says Christy Clark, a medical epidemiologist at the US Centers for Disease Control and Prevention in Atlanta, Georgia, who led the study, which was published online this week without peer review.

Reported cases based on PCR and antigen testing greatly underestimate the true rate of infection, especially among children, as many asymptomatic and mild infections have probably not been tested.

To assess the extent of unreported infections, Clarke and her colleagues looked for antibodies against SARS-CoV-2 in residual blood samples taken during doctor visits between September 2021 and February 2022.

The antibodies they were looking for target a specific protein of the SARS-CoV-2 virus that is not present in the COVID-19 vaccines used in the US – so they can say the children were immune from the infection, not the vaccination.

Many factors could explain the rise in infections among toddlers and preschoolers, Clarke said, including that children under five are not eligible for vaccinations and may be less likely to wear masks or practice social distancing than older children and adults. .

The numbers are startling but not surprising, and “it’s possible that we underestimated the strength of the infection during the Omicron wave,” says Shabir Mahdi, a vaccinologist at the University of the Witwatersrand, South Africa.

Antibody tests can’t tell if a person has been infected more than once and may miss some infections because antibodies weaken over time, he says. The antibody test used in the study only detected about 80% of the infections that another antibody test would detect, Madhi says.

Studies show that the risk of severe illness in children infected with the Omicron virus is lower than with the Delta virus.

In one US study,2 Davis and Rong Xu, a data scientist who also works at Case Western Reserve University, studied more than 650,000 children under the age of five and found that the risk of becoming seriously ill during the Omicron wave was approximately one-third from risk during the Delta wave, as measured by the number of emergency hospital admissions between November 2021 and January 2022. Xu says it’s important to study the long-term effects of the surge in infections in children.

So far, hospitalization rates among children have been much lower than in older age groups, Madhi says. “The children were spared,” he says. “We should be grateful for that.” 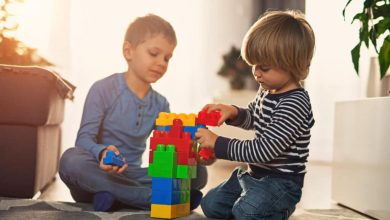 Eternal chemicals found in children’s products, including those labeled as environmentally friendly 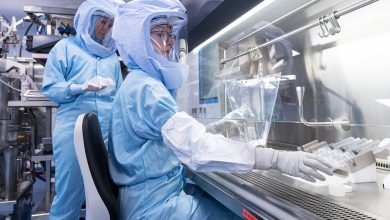 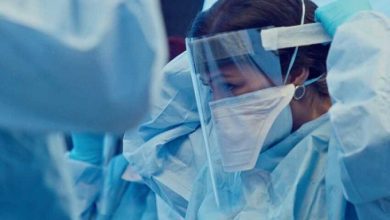 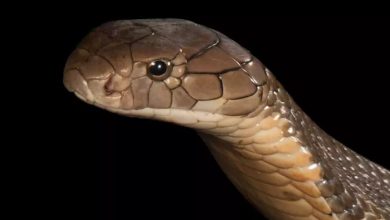