(ORDO NEWS) — The Giza Plateau, adjacent to the rest of the characteristic monuments of the region, has one thing in common – erosion.

Both the pyramids and the Sphinx show wear and tear, which led researchers to speculate that these monuments were under water for a long time. That is, they were antediluvian, and the discovered fossils can support this hypothesis.

The study, carried out by several archaeologists, took years of preparation, and eventually the results of the study were made public.

The fossil was discovered by Sheriff El Morsy and Antoine Guizal. The first worked in the Giza necropolis for two decades.

During the study, Morsi documented that at some point in history, the entire territory of Giza was under water.

This fact surprised the experts, who held on to the theory in defiance of the rest of the scientific community.

Initially, it was believed that this area could be part of a lagoon. Water completely flooded the rest of the complexes, including the pyramids and the sphinx. 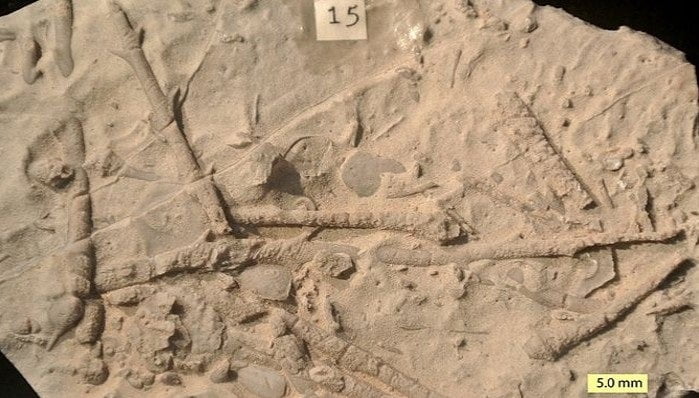 Some scientists argue that the found fossil does not support the theory that water flooded the area. They believe it is part of the original limestone that has been eroded.

The fossil was discovered on the Giza Plateau. El-Morsi and Zhigal write: “We can clearly see the pristine state and minute details of the exoskeleton’s perforations, which means that this sea creature must have been petrified from recent times.”

“During one of the documentation of the ancient coastline, I almost tripped over the second level block of the temple,” Mr. El Morsi explained.

“To my surprise, the bump on the top surface of the block that I almost tripped over was actually the exoskeleton of what appears to be an echinoid (sea urchin) fossil, a sea creature that lives at relatively shallow depths.” 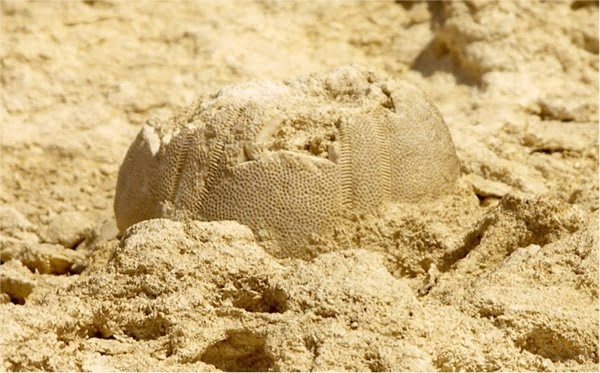 This data led El-Morsi and his colleagues to suggest that in the distant past the Giza plateau was flooded by a surge.

In particular, they focused their attention on the temple site of Menkare, which, in their opinion, could be a former lagoon, when the water level covered the entire Necropolis, including the Great Sphinx, as well as the surrounding temple complexes.

However, it has been proven that the fossil was covered with a layer of cement, disproving this theory.

In addition, the above find was found in the tidal part of the lagoon, which is extremely strange. Other studies have found small fish in the limestone block.

However, the discovery of this fossil increases the number of mysteries that this region hides.

This is not the first time that it has been suggested that the great monuments of Egypt were built in a much older era than is generally believed. Or maybe the Egyptians did not even build them, but found them after the amount of water decreased.

Back in the early 1990s, Dr. Schoch suggested that the Great Sphinx of Giza is a structure that is thousands of years older than archaeologists currently believe, and that it was built between 5,000 and 9,000 BC.

Egyptologists, geologists, and others have rejected the water erosion hypothesis and the idea of ​​an older Sphinx, pointing to archaeological, climatological, and geological evidence to the contrary.