(ORDO NEWS) — Count Ugolino della Gherardesca… Do you know this name? Most likely not, like most Italians, if not for Dante Alighieri’s masterpiece The Divine Comedy.

As you know, the “Divine Comedy” tells the story of Dante’s journey through the Inferno, Purgatory and Paradise.

In the deepest circle of the Inferno, Dante and his guide Virgil stumble upon two souls immersed in ice: one of them obsessively gnaws on the skull of the other.

In the words of Dante:

“I saw two shadows frozen in the same pit.
so close that one head covered the other;
like the hungry devour their bread, the soul
clenched the other with its teeth.
where the brain meets the back of the head”

Ugolino is the soul feasting on the skull of Archbishop Ruggieri, who imprisoned him and let him starve to death along with his children.

In 1288, Pisa suffered from a sharp rise in prices, which led to food shortages and riots among the embittered population. During one of these riots, Ugolino killed the archbishop’s nephew, turning the latter against him.

In the end Ugolino was captured along with his sons Gaddo, Uguccione, grandsons Nino and Anselmuccio.

All of them were imprisoned in the Muda tower.

In March 1289, by order of the archbishop, the keys to Ugolino’s cell were thrown into the Arno River, and the captives were left to starve.

It is here that Dante’s poem reaches its peak of subtle ambiguity. Ugolino says:

…And I, already blind, groped for my offspring I
called out to them, although I saw them die,
for two long days.
And hunger had more power over me than even sadness.”

That’s where the mystery lies. 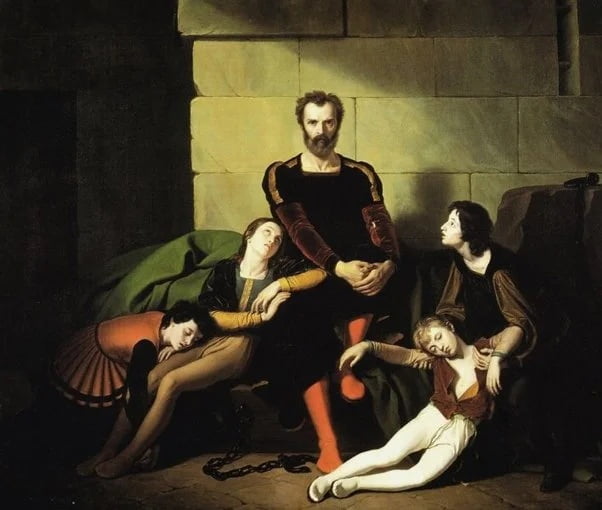 Should this last verse be interpreted to mean that Ugolino died of hunger rather than grief, or, as others suggest, that hunger overcame his paternal feelings and caused him to eat his children.