(ORDO NEWS) — The Al Saflieni Hypogeum in Malta is the world’s only prehistoric underground temple that holds a unique secret: it resonates at a so-called “sacred frequency”.

The Hypogeum underground structure , built almost 5,000 years ago, is one of the best preserved examples of the Maltese temple building culture. However, the feature that surprised scientists the most was the unique acoustic properties found in its underground spaces.

The Hypogeum consists of a series of elliptical chambers on three levels, which are accessed through different corridors. The main rooms are distinguished by their domed vaults and the complex structure of false compartments.

Scholars believe that the Hypogeum was originally used as a sanctuary, possibly for an oracle. Therefore, a unique chamber inside the structure, carved from solid limestone and demonstrating incredible acoustic properties, was called the “Oracle Chamber”.

The word spoken in the Oracle Chamber is amplified a hundredfold and is heard throughout the structure. According to some reports, this creates the feeling of being inside a giant bell. At certain heights, the listener feels the vibration of sound in the bones and tissues as strongly as he hears it in the ear.

The amazing acoustic properties manifested in the structure have already been studied. Maltese composer Ruben Zara and an Italian research team found that in the Oracle Chamber, sound resonates at a frequency of 110 Hz, which is consistent with findings in many other Neolithic chambers around the world, such as Newgrange, Ireland.

Researcher Robert Jahn of Princeton University believes that the exact height of this echo is determined by the size of the room or the quality of the stone.

But the question remains – was this effect intentional? Was the Hypogeum really meant to create it? Maybe our ancestors knew something that we are only now rediscovering?

One theory put forward by Paolo Debertolis and Niccolò Bisconti of the Universities of Trieste and Siena respectively is that the room was built to create acoustics that affect the psyche of people, perhaps to enhance mystical experiences during rituals. This idea has received significant support in academic circles.

In 2008, Ian Cook of the University of California at Los Angeles and his colleagues conducted an experiment in which brain activity in a number of volunteers was monitored using EEG by influencing various resonant frequencies.

They found that at 110/111 Hz, brain activity in the language centers is significantly reduced, allowing other processes to become more prominent. 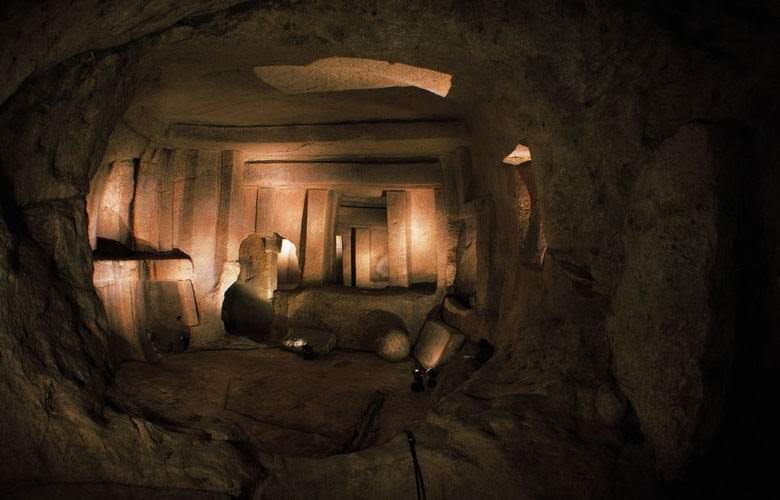 According to Paul Devereaux, professor of archeoacoustics at Cambridge, this type of brain activity is associated with a hypnotic state of drowsiness, including vivid mental images and auditory hallucinations. Most likely, this kind of shift does not occur at other frequencies.

This means that people who took part in ritual singing, for example, in the Hypogeum room, may have been exposed to vibrations that affected their brain activity. According to biological behavior scientists, this impact “turned on” an area that is associated with mood, empathy and social behavior.

A multidisciplinary team of researchers recently conducted an unusual experiment in which they placed microphones in the Oracle’s chamber and used digital recorders to test the camera’s response to various voices and simple musical instruments that may have been present at the time the Hypogeum was used (4000-2500 BC). e.).

The researchers found that the male voice can stimulate structure resonance at two frequencies (114 Hz and 68-70 Hz). The horn and shell don’t create any resonance at all, and the friction drum creates low resonance.

Interestingly, the shamanic drum, made of natural leather, created a strong resonant stimulation at a frequency of 114 Hz, and a male voice singing “oh-oh-oh-oh” (while the female voice did not produce such an effect) evoked a similar response.

Despite research into the unusual properties of the Oracle Chamber, there are no fewer questions. However, scientists are getting closer and closer to unraveling the mysteries of this ancient and mysterious place.