(ORDO NEWS) — To explain to the inhabitant of ancient Vindolanda Sekundin what a bad person he is, someone spared no time for stone carving.

Employees of the British archaeological foundation Vindolanda Charitable Trust reported a unique find: project volunteer Dylan Herbert found in a pile of garbage (this often happens) a stone with an image of a phallus carved on it and some letters.

After the archaeologists had already taken up the find and cleaned the stone of dirt, it became clear: this is not an architectural element of something that is related to the phallic cult. On a stone measuring 40 by 15 centimeters, in addition to the picture, there was an inscription: SECVNDINVS CACOR.

Experts in Roman epigraphy (those who study inscriptions carved in hard materials) came to the conclusion that the first word – Secundinus – is a name, and the second is a distortion of the word “cacator”.

Dr. Andrew Birley, excavation director and general manager of the foundation, commented: “Finding an inscription, a direct message from the past, is always a big deal at Roman excavations, but this inscription really surprised us.

When we deciphered the message, we realized that its author clearly had big problems with Sekundin and was confident enough in himself to publicly state his thoughts on stone. I have no doubt that Secundin would not have been very pleased to see this when he roamed here over 1700 years ago.”

The Roman phallus is often regarded as a good luck charm or a symbol of fertility, in other words, a completely positive sign.

In general, the largest number of ancient Roman images (reliefs and sculptures) of phalluses have already been found in Vindolanda – more than in any other Roman settlement near Hadrian’s Wall. Most likely, this is due to the fact that excavations have been going on there for more than a hundred years.

However, in this case, the author of the drawing of the phallus took advantage of the literal meaning and altered it for his own purposes.

Each letter is carved very carefully: that is, a person spent a lot of time on the inscription and drawing. Apparently, Sekundin greatly annoyed the author of the inscription with something, since he showed such perseverance and depth of feelings.

Cutting a stone, of course, is not easy, but such an insult cannot be erased or painted over – like an inscription on the wall of a modern entrance. Centuries before the advent of print newspapers or social media, this was one of the best ways to get a lot of people to see your point of view.

Vindolanda was founded by the Romans in the north of modern Northumberland in 85 AD – then it was a very small fort. He was part of a system of forts located behind Hadrian’s Wall and designed to repel the attacks of the Picts from the north. 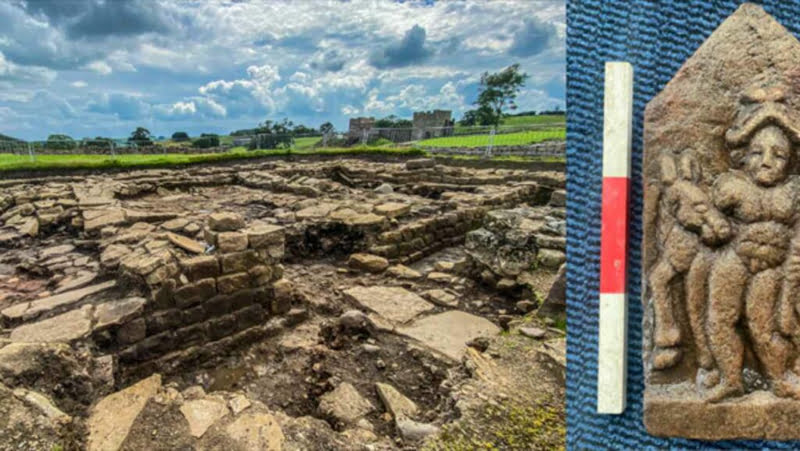 Usually, the Romans, occupying any area, immediately rebuilt it for themselves: they laid roads, built baths, arenas, and other public places. On the northern border, all this was, of course, not in such quantity and quality as, for example, in Londinium.

But still, the settlement gradually increased at the expense of local residents, who also did not like the raids and who wanted to live in peace under the protection of the legions.

Even after the Romans left Britain, Vindolanda was inhabited: the Picts had not gone away, and it was more convenient to defend against them in a fortress. The settlement was empty only at the beginning of the 10th century.

Vindolanda, with its fort and settlement, is a real treasure trove of information about everyday life during the Roman Empire. For example, they found a handwritten invitation in which a woman politely asks her “dear sister” to join her to celebrate her birthday.

As we can see, the person whom Sekundin annoyed with something decided not to exchange for manuscripts (otherwise they would still burn) – and immediately immortalized his dislike in stone.