(ORDO NEWS) — The fearsome “vampire” predator that lurked in Earth’s oceans more than 160 million years ago probably actually sucked its prey, at least in some sense.

A new analysis of exceptionally well-preserved fossils of the small cephalopod Vampyronassa rhodanica, related to modern vampire squid (actually not vampires or squids), showed the presence of muscular suckers, which this beast likely used to capture and manipulate prey.

In other words, it was an active predator, hunting in the pelagic depths for tasty food.

This is in direct contrast to the animal’s modern relatives, Vampyroteuthis infernalis, whose suckers appear to be practically non-functional, and which collect drifting flakes of organic material using sticky cells on a pair of specialized thread-like appendages.

“The contrast in trophic niches between these two taxa is consistent with the hypothesis that these forms diversified in the continental shelf environment prior to Oligocene adaptations leading to their modern deep-sea lifestyle,” writes a team of researchers led by paleontologist Alison Rowe of the Sorbonne University. in France.

Muscular animals such as cephalopods are quite rare in the fossil record. Soft tissues do not fossilize as easily or well as bones, so fossils, especially good fossils, are very rare.

However, rarity does not mean absence, and Rowe and her colleagues were able to study three V. rhodanica fossils from a lagerstatt (sedimentary deposit) dating back over 160 million years at La Voulte-sur-Rhone in France. This is a type of very thin sedimentary layer that preserves fossils exceptionally well, including soft tissues.

Even soft tissues preserved in this way are not always easy to disassemble. To understand the anatomy of V. rhodanica, Rowe and her team took the fossils to the European Synchrotron Radiation Center in France, where they were subjected to non-invasive 3D imaging.

“The fossils are on small slabs that are very difficult to scan,” Rowe explains.

“In addition, the soft tissues were preserved, but we needed phase contrast imaging to visualize subtle changes in density in the data.”

Therefore, the coherence of the ID19 ESRF beamline was very important to perform phase contrast computed tomography and capture all the fine details such as suckers and small fleshy extensions called cirri.”

The scan revealed some interesting differences between V. rhodanica and V. infernalis, which is currently the only living member of the order Vampyromorph.

Both species are relatively small (the first is only 10 centimeters or 4 inches long), with an oval body flanked by two small fins. Both also have small, fleshy protrusions called cirri coming out of their hands.

However, none of the V. rhodanica fossils showed evidence of thread-like food siphons—instead, there was an elongated pair of arms with a unique arrangement of suckers.

These two specialized dorsal arms have stronger, more muscular cirri and suckers at the ends. In V. infernalis, the cirri are smaller, and the suckers are located only at the ends of the arms farthest from the body. Moreover, they seem to be passive; he does not use them to capture prey.

“We think that the morphology and arrangement of V. rhodanica’s suckers and cirri in the differentiated crown of the hand allowed V. rhodanica to increase its absorptive and sensory potential compared to the modern form and helped them manipulate and hold prey,” says Rowe.

In other words, V. rhodanica has what it takes to be an active predator in the pelagic seas, with more sensitive senses and the ability to capture prey. V. infernalis is more peaceful and opportunistic.

Although related, the two species occupy different ecological niches…neither of which has anything to do with vampirism. Well, okay.

In the Oligocene, about 30 million years ago, vampire squids already lived at depth, crouching and waiting for organic remains to fall into their hungry embrace.

Over the past millions of years, vampire squids have significantly changed their way of life. How and why this happened will be the subject of future research…if fossils can be found. 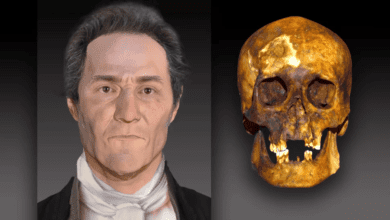