(ORDO NEWS) — In recent years, various researchers and theorists have discovered many mysterious objects on Mars.

The unusually shaped rock was spotted by a Martian rover a few years ago, but today the object has once again stirred the minds of Mars explorers.

Unusual structures are often found on Mars, which are of interest not only to scientists, but also to ordinary people.

Due to the fact that NASA tries to publish everything “as is”, many experts have already made a career of finding mysterious objects on the surface of the Red Planet.

Most of the finds made on Mars are not so impressive. But there are some that are remarkable in their own right.

One of these mysteries was discovered by researchers in images of the surface of Mars taken by the NASA rover. This is a stone that stands out noticeably against the background of a rock formation.

Some netizens think it’s not a rock… or at least unusual. Others have suggested that it is most likely a part that has fallen off some machine.

We might wonder if this is part of some sort of Martian machine, vehicle, or spacecraft? Probably not. 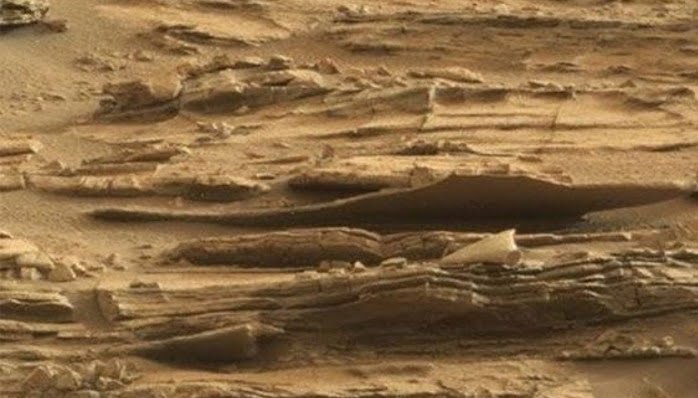 However, one gets the impression that this is definitely not a simple stone. It may not even be a natural object. It’s all about his form.

The vast majority of theorists agree that the intriguing object is too symmetrical to be a natural formation.

On the other hand, we really know little about the Martian landscape, so the local environment may not present such surprises.

Suffice it to recall a photograph taken by the Curiosity rover on May 7, 2022, which captured a structure that looked like a doorway .

Most often, researchers associate such finds on the Red Planet with the well-known theory about Mars.

According to this hypothesis, the Red Planet was inhabited by the Martian race thousands of years ago, and during our exploration of Mars with the help of rovers we find the remains of this civilization .

Findings like this again raise controversy about whether we find the remains of an ancient civilization on Mars?

Some researchers believe that there is nothing that would indicate that representatives of ancient civilizations continue to inhabit the Red Planet.

If aliens have visited the solar system, we can find evidence : Here’s how to do it

If aliens have visited the solar system, we can find evidence : Here’s how to do it