Now Japanese scientists have taught these cells to move: it turned out that just a couple of additional proteins are enough for this.

Flying and running, crawling and swimming – any form of active movement begins with individual cells. However, the evolutionary origin of cell motility remains unclear.

Some aspects of this process are revealed by the new work of biologists from Osaka City University, who managed to create a synthetic organism that can actively move in liquids.

It is assumed that the first attempts of microbes to move were associated with the work of proteins that perform completely different and important functions, including actin and tubulin, proteins of the cell skeleton.

Due to some mutations, the deformations that these molecules undergo during operation began to intensify and began to change the shape of the entire cell, allowing it to move. This hypothesis and decided to test the Japanese biologists.

To do this, they used artificial microbes JCVI-syn-3b – a variant of synthetic organisms that a team of American geneticist Craig Venter created several years ago based on mycoplasma.

These cells are known for containing only a minimal set of genes required for metabolism, exactly 473, and do not carry anything “extra”, including active movement. 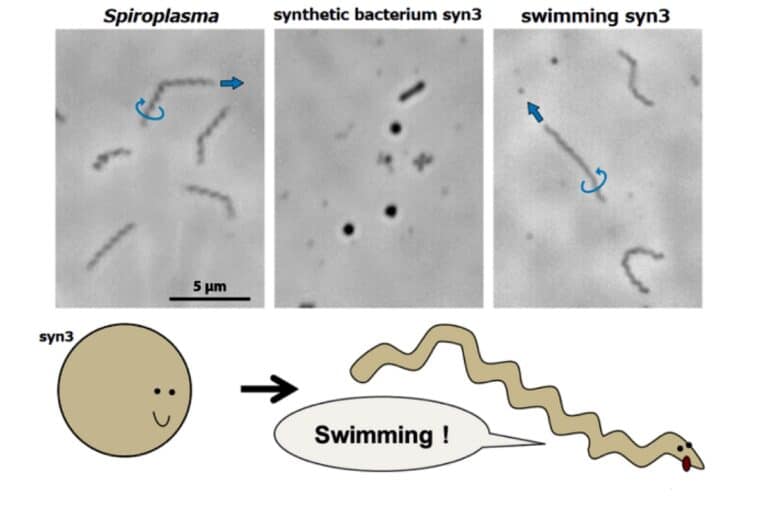 The genes that are needed for this were borrowed by Japanese scientists from Spiroplasma bacteria, which can move by “switching” the cellular skeleton from one state to another and screwing into a liquid medium like flexible corkscrews.

This process is provided by the work of seven proteins derived from the cytoskeletal protein MreB from the actin family. It was their genes that biologists introduced into the DNA of the syn-3 synthetic microbe.

The modified syn-3 cells acquired a helical shape and indeed turned out to be capable of active movement due to deformations, as spiroplasmas do.

Moreover, by selectively turning off new genes in them, scientists have shown that just two proteins can be enough to achieve the same effect – a combination of MreB4 and MreB5 or MreB1 and MreB5. Equipped with such a pair, syn-3 cells retained the same ability to move.