(ORDO NEWS) — The Milky Way is older than astronomers thought, or part of it is. A newly-published study shows that part of the disk is two billion years older than we thought.

The region, called the thick disk, started forming only 0.8 billion years after the Big Bang.

A pair of astronomers pieced together the Milky Way’s history in more detail than ever. Their results are based on detailed data from the ESA’s Gaia mission and China’s Large Sky Area Multi-Object Fiber Spectroscopic Telescope (LAMOST). The key to this discovery lies in subgiant stars.

The paper is “A time-resolved picture of our Milky Way’s early formation history,” and it’s online in the journal Nature. The authors are Maosheng Xiang and Hans-Walter Rix, both from the Max-Planck Institute for Astronomy (MPIA.) Precision age measurements are the holy grail in some aspects of astronomy, which is true in this case. Xiang and Rix used more than just metallicity to determine stellar ages. They focused on a specific type of star: subgiants.

The subgiant phase in a star’s life is relatively brief, so astronomers can determine a star’s age most accurately when it’s a subgiant. Subgiants are transitioning to red giants and no longer produce energy in their cores. Instead, fusion has moved into a shell around the core.

In this study, the pair of scientists used LAMOST data to determine the metallicity of about 250,000 stars in different parts of the Milky Way. They also used Gaia data which gives the precise position and brightness data for about 1.5 billion stars.

The ESA’s Gaia mission is responsible for increased accuracy in this study and many others. Before Gaia, astronomers routinely worked with stellar age uncertainties between 20 to 40 percent. That meant that ages could be off by one billion years, which is a lot.

But Gaia has changed all this. The current data release from the mission is Gaia EDR 3 or Early Data Release 3, and it’s a vast improvement. EDR3 gives precise 3D positions of over 330,000 stars. It also gives high-precision measurements of the stars’ motions through space.

The researchers used all this data from Gaia and LAMOST and compared it to known models of stellar parameters to determine the subgiants’ ages with greater accuracy. “With Gaia’s brightness data, we are able to determine the age of a subgiant star to a few percent,” said Maosheng.

The subgiants are spread throughout the different parts of the Milky Way, allowing the researchers to piece together the ages of the other components and build a timeline of the Milky Way’s history.

The study shows two distinct phases in our galaxy’s history. The first phase started 0.8 billion years after the Big Bang, when the thick disk began forming stars. The galactic halo’s inner regions started to develop too.

Two billion years after that, a merger propelled the star formation in the thick disk to completion. A dwarf galaxy named Gaia-Sausage-Enceladus merged with the Milky Way.

The Gaia-Sausage-Enceladus (GSE) dwarf galaxy isn’t shaped like a sausage. It gets its name from plotting its stars on a velocity chart, where their orbits are highly-elongated. When GSE merged with the Milky Way, it helped create the thick disk, and the gas that came with it fueled the star formation in that part of the galaxy.

The star formation triggered in the thick disk by the GSE lasted for about 4 billion years. About 6 billion years after the Big Bang, the gas was all used up. During that period, the thick disk’s metallicity increased by more than a factor of ten.

The study also found a very tight correlation between the metallicity and the ages of the stars in the entire disk. That means that the gas that came with the GSE must have been turbulent, causing it to mix more thoroughly in the disk.

Astronomers only recently discovered the GSE merger in 2018. Discoveries like it have shaped our understanding of the Milky Way’s history, and the galaxy’s developmental timeline is becoming clearer. This new study is giving us a more detailed account.

“Since the discovery of the ancient merger with Gaia-Sausage-Enceladus, in 2018, astronomers have suspected that the Milky Way was already there before the halo formed, but we didn’t have a clear picture of what that Milky Way looked like,” says Maosheng.

“Our results provide exquisite details about that part of the Milky Way, such as its birthday, star-formation rate and metal enrichment history. Putting together these discoveries using Gaia data is revolutionizing our picture of when and how our galaxy was formed.”

In recent years astronomers have discovered more detail about the Milky Way. But it’s challenging to map its structure because we’re in the middle of it. The ESA’s Gaia mission is our best catalogue yet of the stars in the Milky Way. And each data release gets better and better.

“With each new analysis and data release, Gaia allows us to piece together the history of our galaxy in even more unprecedented detail. With the release of Gaia DR3 in June, astronomers will be able to enrich the story with even more details,” says Timo Prusti, Gaia Project Scientist for ESA.

The Gaia mission is essential, but observations of other galaxies like the Milky Way also give astronomers insights into the Milky Way’s structure and history. But observing galaxies only two billion years after the Big Bang is difficult. That requires powerful infrared telescopes. Fortunately, one long-awaited infrared space telescope is about to begin observations soon.

Astronomers want to know more about the GSE merger and how it led to star formation and shaped our galaxy’s thick disk only two billion years after the Big Bang. JWST observations of ancient, high-redshift galaxies similar to the Milky Way could help answer some questions and fill in a more detailed galactic history.

And in June, the ESA will release Gaia’s full third data release, called DR3. The DR3 catalogue will contain ages, metallicity, and spectra for over 7 million stars. DR3 and the JWST will be a potent combination.

What will all of that data tell us? As the Universe evolves, galaxies must either eat or be eaten. Gravity draws galaxies together, but the Universe is also expanding thanks to dark energy, and the dark energy pushes galaxies apart. So galaxies tend to clump together into groups. The Milky Way is part of the Local Group.

The groups stay internally coherent because of the galaxies’ combined gravity, but the groups drift away from one another due to expansion. Eventually, the largest galaxies in a group consume the smaller ones.

Eventually, the Milky Way will consume both, and then in about 4.5 billion years, it’ll merge with the even larger Andromeda Galaxy, another member of the Local Group.

It’s an odd situation because the Milky Way’s future might be easier to discern than its past. That’s the conundrum of an expanding Universe: the evidence we seek keeps receding from us, lost to time and distance.

But the JWST and the Gaia DR3 have the potential to turn the tables on the expanding Universe. Together they can shed more light on the Milky Way’s history and on the details of galaxy mergers in general. Hopefully, we’ll end up with a much more thorough historical timeline. 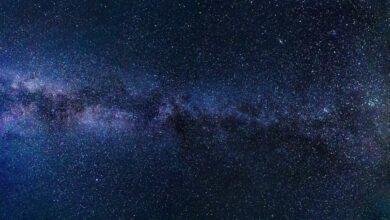