(ORDO NEWS) — Amateur archaeologist Daniel Ludin discovered a treasure of 1290 Roman coins in Switzerland. All of them were minted from a copper alloy in the first half of the 4th century AD, during the reign of Constantine the Great.

According to researchers, this money was equivalent to two monthly earnings of a Roman legionnaire. This was reported in a press release from the Swiss archaeological service Archäologie Baselland.

Before the Roman conquest, the territory of modern Switzerland was inhabited by various Celtic tribes, for example, the Helvetii and Vindeliki, who were carriers of the La Tène archaeological culture, as well as the Rets, representatives of the Fritzens-Sancenzo culture, whose origin remains quite debatable.

However, Octavian Augustus launched a series of military campaigns in 35 BC aimed at conquering the Alpine region, Rhetia and Noricus.

The Rhets were conquered by some of the last around 15–13 BC, after which most of them were destroyed or sold into slavery, and the rest were Romanized.

The Roman period was marked by the urbanization of modern Switzerland. Numerous settlements and a developed road network appeared in it, the Latin language and the Roman religion spread.

Cities such as Zurich, Basel, Geneva and Lausanne were founded during this period. However, starting in 264, when the Alemanni invaded Switzerland, the Romans gradually lost control of these lands. The Germans finally conquered them in the 5th century. 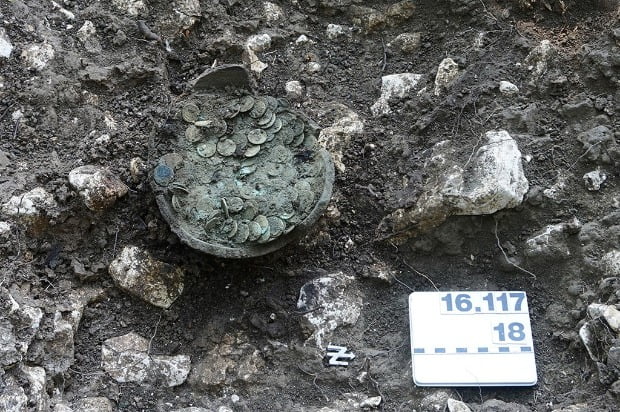 Employees of the Swiss archaeological service Archäologie Baselland reported on the treasure, which was discovered in September 2021 using a metal detector by amateur archaeologist Daniel Lüdin during an examination of a forest area in the vicinity of Wildenstein Castle, located in the semi-canton of Basel-Lands.

Lyudin found several Roman coins and fragments of ceramics, which he reported to professional archaeologists. The scientists who arrived at the site removed the vessel with coins, along with the soil surrounding it, for laboratory research.

After doing a CT scan, they noticed that inside the pot, the coins were divided into two parts. Subsequently, it turned out that the vessel contained the skin of a large horned animal. Archaeologists found it difficult to answer the question why this was done, perhaps the coins belonged to two different people.

Research has shown that the coins were made from a copper alloy with a very low silver content. They were all minted during the reign of Emperor Constantine the Great (AD 306-337), with the youngest examples dating from 332-335.

According to scientists, all the coins found are approximately equivalent to one gold solidus weighing 4.55 grams, that is, two monthly earnings of a Roman soldier.

An ancient financial crisis has been discovered… in Roman Coins

An ancient financial crisis has been discovered… in Roman Coins