(ORDO NEWS) — The Battle of Shiloh is one of the battles that took place during the American Civil War (April 12, 1861 – May 9, 1865), in 1862 in southwestern Tennessee. The Union victory at the Battle of Shiloh allowed its forces to penetrate deep into Confederate territory.

However, both sides suffered heavy losses. In fact, the Battle of Shiloh was the bloodiest battle of the American Civil War up to that point.

One of the strange things that happened at the site of the Battle of Shiloh was that among the wounded soldiers there were those whose wounds began to glow in the dark.

Although this story has been repeated over the years, the mystery of the glowing wounds was only revealed 140 years after the Battle of Shailoch.

Civil War events leading up to the Battle of Shiloh

The American Civil War began in 1861. Although relations between northern and southern states had been tense for some time, the election of Abraham Lincoln as president in November 1860 was the straw that broke the camel’s back. Within three months, seven southern states seceded from the United States.

In March 1861, Lincoln took office, and a month later, on April 12, the first shots of the American Civil War were fired. Fort Sumter in Charleston, South Carolina was besieged by Confederate troops.

After a 34-hour bombardment, the defenders surrendered. Both sides suffered no casualties. Over the next few weeks, four more southern states seceded.

The Army of the Potomac was the Union’s main field force in the eastern theater of the American Civil War. In other words, the Union was not doing very well in this sector of the war.

The situation in the Western theater of the American Civil War was somewhat different. In 1862, the Union had more success in this theater than in the east. East of the Missouri, the Confederate army of 40,000 was commanded by Albert Sidney Johnston.

This army was to hold a long line through Kentucky that stretched from Cumberland Gap east across Bowling Green and down south to Columbus on the Mississippi River.

In early 1862, however, this line was broken by a numerically superior Union force. This achievement, notably the capture of Forts Henry and Donelson in February by Ulysses S. Grant, marked the first real Union success in the Civil War. 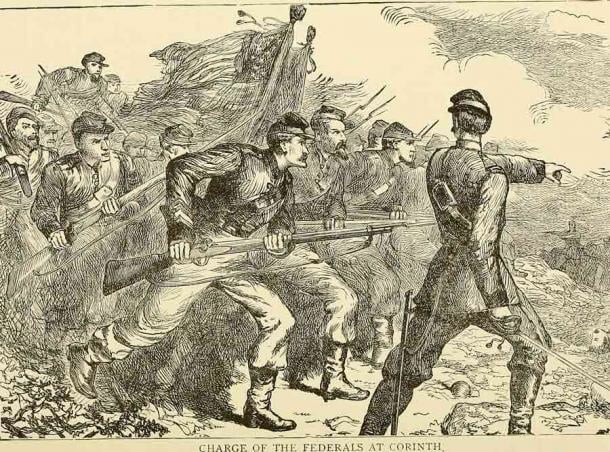 Kentucky and most of Tennessee become union territories

After losing Forts Henry and Donelson in February, the Confederates abandoned their positions in Columbus, Kentucky, and evacuated from Nashville, Tennessee’s capital. Thus, Kentucky was now in Union hands, as was much of Tennessee.

Grant’s next target was the Memphis and Charleston Railroad, which, if captured, would give the Union full control of the region. Meanwhile, Johnston was busy regrouping scattered Confederate forces in Corinth, Mississippi.

Grant had 42,000 men with him and was waiting for reinforcements from Don Carlos Buell. The latter commanded 20,000 men. Johnston decided to take the initiative and launched an attack on Grant’s troops before Buell’s reinforcements arrived.

This took Grant by surprise, who had not expected the Confederate troops to attack. Moreover, since Grant was on the offensive, he did not order his men to reinforce the camps. The ensuing battle became known as the Battle of Shiloh.

At dawn on April 6, a Union patrol spotted the Confederates who were preparing to attack and separated from the Union camp (a little over a mile). Johnston’s attack caught the Union army by surprise, and the latter was driven back near Shiloh Church.

The Confederates held the upper hand throughout the day, and Grant’s men were driven back to Pittsburgh Wharf. This threatened to trap Union troops along the Tennessee River. Most of the troops on both sides were inexperienced, and the battle took place in the forest.

In the middle of the day on April 6, Johnston rode forward to direct the Confederate attack. At this time, the general was wounded in the leg by a bullet. Unfortunately for Johnston, the bullet severed an artery and the general quickly bled to death. 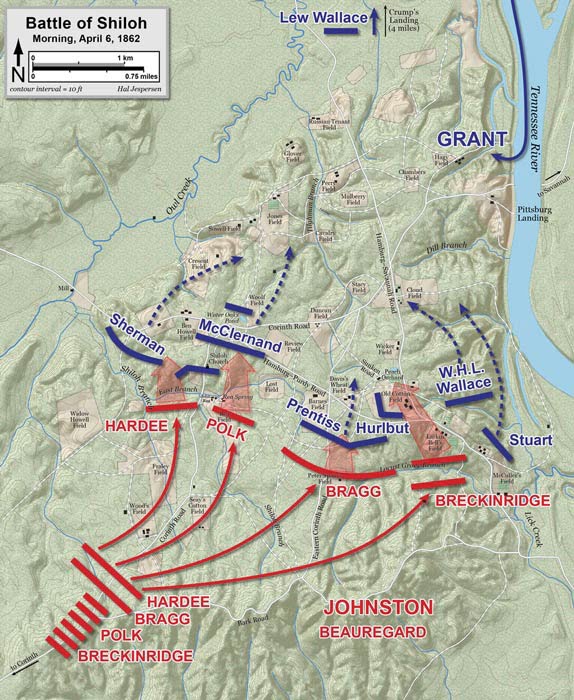 Be that as it may, the Confederates continued to put pressure on the Union troops and pushed them further back. However, they were unable to break their enemies. At dusk, Beauregard, believing that he had won, stopped the advance of the Confederates.

The battle resumed the next day. By this time, the vanguard of Buell’s army approached the battlefield, which provided the Union with a numerical advantage over the Confederates. So Grant decided to go on the offensive.

Beauregard at first decided to counterattack, but was eventually forced to retreat. Regrouping, the Confederates counterattacked again. This time they managed to stop Grant’s advance.

By noon on April 7, Beauregard realized that the enemy outnumbered him, and ordered his troops to retreat to Corinth. By the end of the second day of the battle, the Union had reclaimed the territories lost the previous day.

After emerging victorious from the Battle of Shiloh, Grant sent William T. Sherman and Thomas J. Wood to investigate the position of the Confederates. A few miles south of the battle, at Follen Timbers, they encountered Confederate Colonel Nathan Bedford Forrest’s cavalry.

The Colonel recklessly charged at the Union troops ahead of his men, resulting in him being shot at point-blank range. Forrest survived this life-threatening injury, and his bold actions caused the Union troops to flee back to Pittsburgh Landing.

This gave the Confederates the time they needed to retreat to Corinth. In any case, due to the heavy losses suffered by both sides, the Union and Confederate armies were immobilized for the next three weeks. 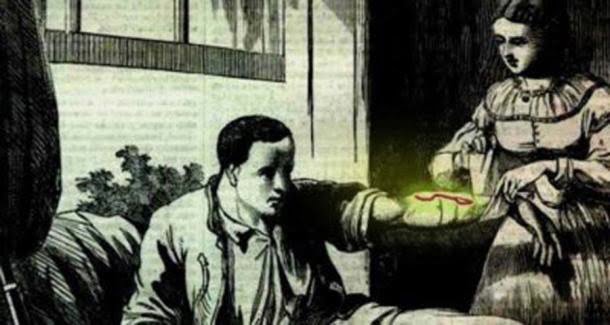 Strange wounds with angel glow discovered after the battle

After the Battle of Shiloh, the wounded had to be cared for, and a curious phenomenon was noticed. As night fell after the end of the battle, many wounded soldiers began to glow in the dark. This greenish-blue glow later became known as the “angel glow”.

In addition, they had fewer infections and healed faster. Therefore, it was believed that the glow is a beneficial force of divine origin. Since the doctors of that time could not explain this phenomenon, they left everything as it is.

In fact, no one seems to have done any further research into the nature of this enigmatic phenomenon in the decades that followed. However, the story has been retold countless times and has become part of martial folklore by the 21st century.

One of those who heard about the story was Bill Martin, who was a high school student when he went on a tour of the battlefield in 2001. The story of the angel’s radiance aroused Martin’s curiosity and he wanted to know more about it.

Therefore, Martin, along with his friend Jonathan Curtis, decided to investigate the cause of the Angel’s glow as part of a school science project.

The first destination for the two boys was none other than Martin’s mother, Phyllis. It so happened that Phyllis was a microbiologist at the US Department of Agriculture and studied luminescent bacteria living in the soil.

Martin theorized that the Angel’s glow could be caused by a type of luminescent bacteria and asked his mother if it was possible. Phyllis suggested that Martin and Curtis run experiments to test their hypothesis.

Both boys started by identifying bacteria that glowed in the dark and then studied historical records. The latter was to narrow their search down to the bacteria that might be present in Shiloh.

One potential candidate was Photorhabdus luminescens (P. luminescens), a bacterium that lives inside nematodes, also known as roundworms.

P. luminescens has a symbiotic relationship with a certain genus of nematodes called Heterorhabditis, which are insect parasites. When a nematode infects an insect, it releases the bacteria living in its gut into the host’s bloodstream.

The bacterium then releases toxins that kill the insect and other microbes, as well as enzymes to digest what it kills. This provides nutrients for both the bacterium and the nematode. Under these conditions, the bacteria emit a glow that attracts other insects, which become the next food for the nematode and bacteria. 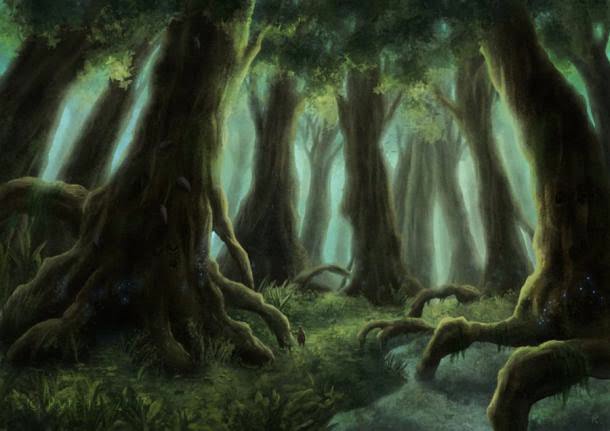 The mystery of Martin and Curtis’ glowing wounds is solved in 2001!

Martin and Curtis also studied the conditions on the battlefield when the Battle of Shiloh was taking place. They found that the fields were cold, muddy and wet, perfect for P. luminescens to thrive. However, laboratory experiments have shown that bacteria cannot survive at human body temperature.

This posed a problem for Martin’s hypothesis, as it meant that bacteria could not live on soldiers’ wounds.

However, the guys soon realized that in early April, the night temperature at the battle site was low enough that the wounded soldiers, who had lain in the rain for two days, could get hypothermia. In this case, P. luminsecens could live on their wounds.

Taking this information into account, Martin and Curtis concluded that the “angel glow” reported at the Battle of Shiloh was caused by P. luminescens. Bacteria could get into the wounds of soldiers from the soil in which they lay.

The toxins released by the bacterium could kill other microbes in the wounds, thus preventing infections from occurring. Fortunately, neither P. luminescens nor Heterorhabditis pose any particular danger to humans. Moreover, they can be cleared by the human immune system.

Currently, the conclusion reached by Martin and Curtis, namely that the glow of angels is caused by P. luminescens, is the most plausible explanation for this phenomenon (But not the fact that this is true).

Incidentally, these two boys had the opportunity to present their findings at the 2001 Intel International Science and Engineering Fair in San Jose, California.

They took first place in the team competition. Thanks to the research of Martin and Curtis, the story of the glowing wounds at the Battle of Shiloh can be seen not just as part of folklore, but as something that could actually happen.

Ancient South Americans were descendants of the Denisovans

Ancient South Americans were descendants of the Denisovans