(ORDO NEWS) — For a long time it was believed that no one in Southern and Western Europe knew anything about America before the discoveries associated with the travels of Columbus. However, a new translation of a rare medieval Latin text by an Italian monk shows that this view was inaccurate.

This 14th century ancient book mentions a distant land known as “Markalada”, which was previously discovered by Scandinavian explorers. Given the general context of the passage, it becomes clear that the author is referring to either Labrador or Newfoundland on the northeast coast of Canada.

This means that there were people in Italy who knew about the North American continent more than 150 years before Columbus set sail.

This amazing discovery was made by University of Milan professor Paolo Chiesa, who specializes in the study of medieval Latin literature, and several graduate students who helped him study and translate an ancient Italian manuscript known as the Cronica Universalis.

The book was written between 1339 and 1345 by a Dominican friar named Galvano Fiamma and contained a passage in Latin that spoke of the lands that could be reached by sailing west across the Atlantic. Among them was a vast and vast land known as Markalada, which was discovered but never deeply explored.

As additional evidence that the monk was indeed talking about North America, Professor Chiesa cites statements and stories derived from ancient Icelandic sources that mention a land called Markland, which was previously identified by scientists as belonging to the northeast coast of modern Canada.

A rare copy of Fiamma’s book is now owned by a private collector in New York who has given Professor Chiesa permission to photograph the book and its contents. While translating the book into Latin from cover to cover, one of Chiesa’s graduate students found a paragraph containing crucial information.

In the passage, Fiamma recounts this discovery, first noting the success of European navigators who had reached Greenland and Iceland centuries before. Then he wrote the following:

“Farther west there is another land called Markalada, where giants live; in this land there are buildings of such huge stone slabs that no one could build them except huge giants. There are also green trees, animals and a huge number of birds.” 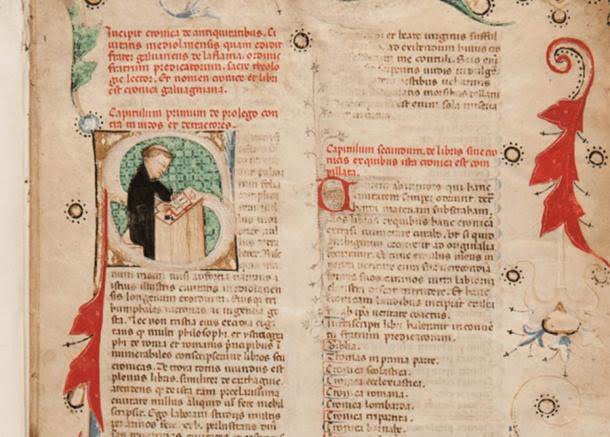 The monk explained that he learned about Markalade from “sailors who often sail the seas of Denmark and Norway.”

This makes it easy to attribute the discovery of the western lands to Norse or Viking tales of adventure and conquest, which may have been passed down to Scandinavian sailors in the 14th century. Those, in turn, could pass on these stories to the Italian sailors whom they met in the port of Genoa.

It has now been reliably established that Norwegian navigators reached the eastern part of the Atlantic Ocean and the lands that were there at the end of the 10th century. They established settlements in Greenland that lasted 500 years and survived even after the Viking Age ended.

Their entry into the North American continent may have occurred at a location on the north coast of Newfoundland known as L’Anse aux Meadows.

The remains of this small Viking settlement were found in 1960, and today L’Anse aux Meadows is the only Norwegian settlement discovered on the North American continent.

Evidence shows that the Vikings did not linger at the site for too long, leaving long before they had the opportunity to expand their holdings.

It is possible that the Norwegian ships continued to dock in Newfoundland or elsewhere for some time, but if so, they most likely remained there long enough to collect timber or other valuable materials.

Because their connection to the North American continent was so tenuous, historians have never been sure that the Viking landing there was known outside of Scandinavia.

It was believed that knowledge of this episode in the history of the Norse could only be known to a relatively small number of people in a limited geographical region.

But it is now clear that people outside of Norway and Denmark knew about the Viking landings in Newfoundland. The stories of those times did not necessarily contain precise and extensive details.

But the main memory of the achievements and discoveries of the Vikings was transmitted at least until the 14th century, and in those parts of Europe that were far from Scandinavia.

The discovery of this passage in the Cronica Universalis raises an interesting question: How widespread was knowledge about the North American continent and other western lands in medieval Europe?

Galvano Fiamma probably acquired his knowledge while studying in Genoa, but he was certainly not the only one who was exposed to such stories.

Perhaps most of those who heard about the giant lands in the cool Arctic simply took them for myths or fairy tales that should not be taken seriously. It is possible that only a few Norwegian and Danish sailors chose to share these legends, which means they would not have become public knowledge.

It is also possible that knowledge of the existence of North America was relatively widespread at the time, and future scholars will find more evidence in older texts to support this.

Of course, if tales of Marcalade were passed down in the 14th century and beyond, they may have circulated long enough for Columbus (presumably a native of Genoa) to hear them.

Such stories may have served as inspiration for the 15th-century explorer, who was long erroneously believed to be the first to reach the shores of America.

The information recorded by Galvano Fiamma in the Cronica Universalis allows us to know that the first European discoverers of America did indeed transmit tales of what they saw, and information about their achievements did indeed reach some distant ports.