(ORDO NEWS) — Not far from the center of Kazan, just 10 kilometers, in the village. Old Arakchino is an amazing and unlike anything previously seen Temple of all religions, it is also known as the Universal Temple. The temple is very unusual. It embodies the unity of God and unites the main world religions in one building.

The idea of ​​building such a temple in 1994 came to Ildar Khanov, a local artist and architect; after his death in 2013, work in the temple was continued by his brother, the artist and sculptor, Ilgiz.

Initially, it was supposed that 16 religious directions would be represented in the temple, but, unfortunately, in 2017 there was a fire in the temple and a significant part of the exposition and documentation was destroyed.

At present, the arrangement work continues with the involvement of caring and creative people. In general, the construction of the temple itself is a personal initiative of the Khanov brothers and exclusively personal and voluntary donations.

The temple is very bright and beautiful, both outside and inside. Looking at it from the outside, from the towering domes and ornaments crowning them, you can guess which religions are represented here, and going inside already confirm or refute your guesses.

The temple has an Orthodox church, a Jewish synagogue, a Muslim mosque, a Buddhist pagoda, etc. All religious rooms are divided into halls, such as Buddha Hall, Shiva Hall, Christ Hall, etc.

In addition, in separate rooms you can see photographs, pencil sketches and drawings , sculptures made by the Khanov brothers in different periods of their work. Passing from hall to hall you involuntarily find yourself from one country to another. All interior decoration is made in one style or another. 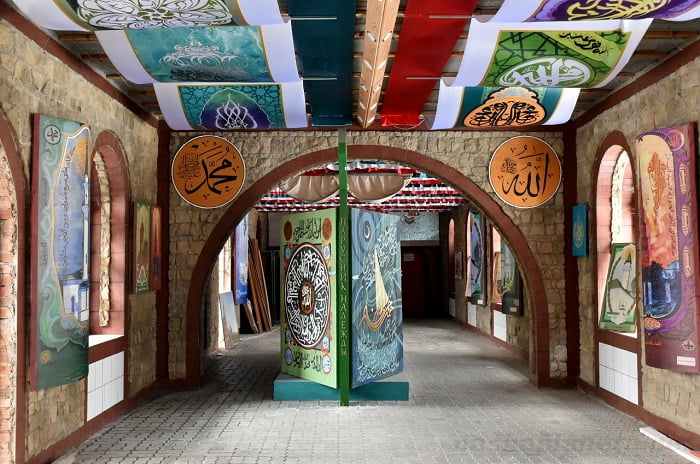 However, this temple is not exactly a temple, but rather a museum, because all the halls of different religions presented are not holy. Therefore, it makes no sense to bow before them.

In addition, according to the owner, it is also the International Cultural Center for Spiritual Unity. Yoga practices, mantra readings and other Indian techniques are held here. You can sign up for a master class on painting plaster figurines.

Entrance fee to the Temple is only 100 rubles, free for children. For those who wish, they organize a tour of the temple for an additional fee. The visit will take approximately 30 minutes.