(ORDO NEWS) — When we imagine potential brothers in mind from space, we subconsciously strive to give them anthropomorphic features: it is no coincidence that the image of the “green man”, the traditional symbol of an alien, is so similar to the most ordinary, albeit very strange person. But, of course, the real inhabitants of other planets, if they really exist, may differ significantly from you and me.

A group of biologists from the University of Oxford have a concept of what aliens would look like if their race were shaped by the same principles as earth’s protein life – in particular, the principle of natural selection.

Biologist Sam Levine notes that there is a certain predictability of evolution, which, in fact, can make the inhabitants of other worlds like us – but these are not all possible options. Most of the hypotheses that were included in the project, called “Darwin’s Aliens”, are based on the so-called mechanistic approach: using observations about the development of life on our planet, scientists project the same patterns onto other celestial bodies. 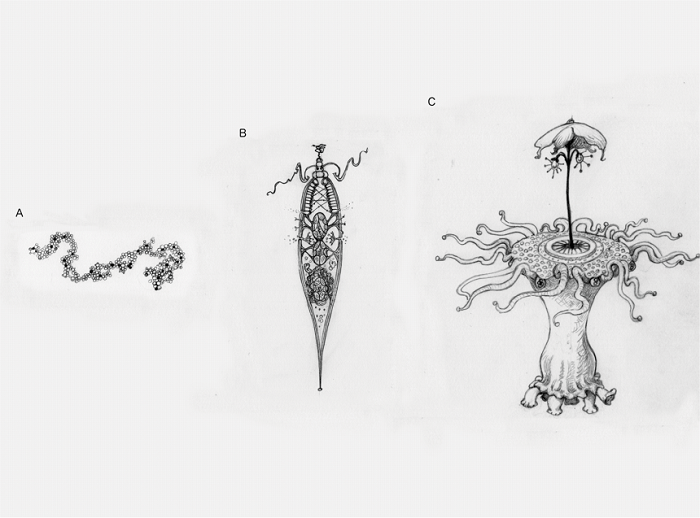 For example, the eye apparatus, according to experts, has evolved at least 40 times, which means that it can be assumed that this process occurred in a similar way on neighboring planets. The mechanistic approach is now widely used in all sciences, especially as a source of theoretical knowledge in the physics and chemistry of the Universe.

This also implies a consequence of the fact that molecules with a high carbon content will most likely form the basis of life – this element is widespread and practically universal.

However, in this case, biologists decided to abandon the comparison with the Earth and used an alternative version of evolutionary development. This position is advantageous in that, for example, it allows one to evaluate not only protein, but also silicon life, which uses pure nitrogen for respiration. Natural selection is the only mechanism known to scientists that allows us to imagine how life took one form or another in the course of evolution.

However, direct parallels with terrestrial organisms are not drawn: for them, life consists primarily in the ability of a creature to reproduce and adapt. Therefore, the existence of natural selection was taken as an axiom: otherwise, it is simply not possible to compile a model of alien life based on terrestrial science.

Levin and his colleagues believe that, as in the case of terrestrial creatures, alien organisms will be a hierarchical structure of smaller systems that closely cooperate with each other. This is similar to how billions of cells in our bodies form organs and tissues.

On a planetary scale, this can even mean a single colony that covers all regions suitable for life and exists as a biosocial society. In this case, it is not possible to talk about particulars – for example, whether the alien will be a two-legged green-skinned dwarf – it is not possible: the appearance of creatures will seriously differ, depending on the conditions of their home planet. However, according to scientists, evolutionary theory suggests a universal tool in order to make assumptions about the nature of alien life in the event that