(ORDO NEWS) — An international team of archaeologists has unveiled a new study detailing about 500 mysterious objects of unknown purpose. They are discovered in Western Sahara using high resolution satellite images.

The study was published in the journal Antiquity. The authors immediately emphasize that during the study it was possible to classify four different types of such objects with different morphology. They are cataloged by their characteristics, topographic position and orientation in the landscape.

Scientists have not yet been able to establish the exact purpose of these objects. However, they suggest that, most likely, these objects are hunting traps.

Previously, such traps, which are only visible from the air, were found in large numbers in the Middle East. Scientists call them “kites” because the shape of such traps, as a rule, resemble kites.

According to the authors of the work, about 500 previously unknown structures were discovered in the heart of Western Sahara. They are located mainly in two places of accumulation.

The first of them is located between the Hoggar and Erg-Cheh mountains, in the Achedzherad and Akhnet regions. The second location of the cluster stretches linearly from the Erg Cheh mountains along the Khank mountain escarpment in Mauritania.

The researchers emphasize that the structures found in the Sahara are significantly different from the “kites” found in other regions.

Therefore, assigning them to the same type of objects is impossible. On the other hand, the study of the characteristics of these objects, the choice of location for them, as well as their orientation still suggest that they were also hunting structures.

From the description it follows that these objects, as a rule, consist of two long and converging walls made of stones. Small lintels were found on some objects inside these walls. According to experts, the converging walls were guides – it was a corral into which one group of hunters drove animals.

The second group of hunters waited for prey at the end of the corral. Animals were trapped and became easy targets for humans. We add that out of more than 500 objects found, 60 structures have not yet been identified.

Their types are categorized as undefined structures. Scientists could not study them in detail due to the poor quality of satellite images. In addition, some of the mysterious objects are probably simply poorly preserved.

Scientists also cannot yet accurately date these objects – this requires field research with access to the site. And the traps are located in hard-to-reach places.

However, by circumstantial evidence, scientists have determined that the objects may belong to a period between about 9000 and 5000 BC, when the Sahara was not a desert, but a humid region with a favorable climate.

Probably, these places were inhabited by people at that time or were often visited by nomadic groups. In any case, the discovery of numerous new “kite-like” structures in Western Sahara is an important addition to the global dataset of known mega-traps. 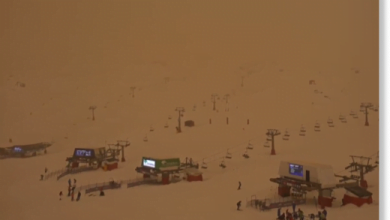