(ORDO NEWS) — The first geomagnetic disturbances caused by a solar flare in several years are expected on Earth on the night of December 9-10, 2020.

The reason will be the masses of solar matter ejected from the atmosphere of our star on the evening of December 7, during an outbreak that occurred here, and is currently propagating towards the Earth. The arrival of the first clouds of solar plasma in near-earth space is expected tomorrow morning, December 9, at 3-4 hours GMT, and the main core of the ejection will reach the orbit of our planet at about 22-24 hours of the same day. In total, our planet will plunge into solar matter for about a little more than a day until mid-December 10. The speed of the solar wind blowing over the Earth will remain elevated after that for almost another week – from the usual 400 km / s it will grow to 600-800 km / s.

The solar explosion occurred on the Earth-facing side of the Sun in a cluster of sunspots currently visible almost exactly in the center of the solar disk. It is in this area that the M4.4 level flared a week ago, which became the largest in the last three years. At that moment, however, the active region was still on the far side of the Sun and could not affect the Earth. At present, the region, on the contrary, is in a position in which its impact on the Earth is maximal. At the same time, the power of the second flash that has occurred now is about 5 times less – on the scale of flares it is classified as C7.4.

Thus, it belongs to the third most powerful class C. Before the second class, designated by the letter M, it lacks about 30% of the power. Up to the highest class X, a multiplier of about 15 is missing. It can be noted that X20 flares are record-breaking in the history of observation, which exceed the current event by more than 200 times in power. Thus, the strength of the impact of the flare on the Earth is determined in this case, mainly, by its successful (in quotes) location, and not by the individual strength of the flare. 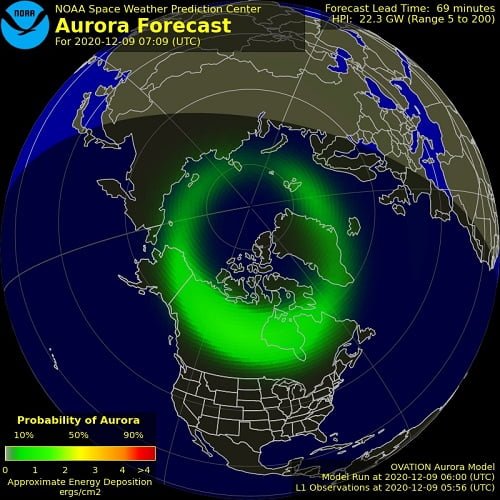 In addition to the negative consequences in the form of a sharp increase in the radiation load on space vehicles, as well as an increase in the oscillations of the magnetic field near the Earth’s surface, one can also note positive consequences for hunters for aurora borealis. The auroral area (the so-called auroral oval) can decrease to latitudes of 60-70 degrees, which will allow them to be observed over much larger geographic areas.

It can also be noted that modern observation facilities are practically unable to track the motion of solar plasma clouds along their entire path to the Earth. The only exceptions are the first few hours, when the masses of matter are still near the Sun. The rest of their path is hidden from view. For this reason, the final force of the impact on the Earth can now be estimated only by the fact, when the masses of gas, which until recently were part of the Sun, reach spacecraft located near the Earth. The first signals about the arrival of solar masses will be given by devices operating at the Lagrange point L1 at a distance of about 1.5 million kilometers from the Earth (as expected, this will happen on December 9). About an hour after the arrival of these signals, a cloud of plasma will envelop the Earth.