(ORDO NEWS) — The study was conducted with four types of mushrooms, each of them was characterized by its own “dialect”.

True, instead of words, letters and sounds, mushrooms use electrical signals that propagate through the network of mycelium. In total, in the mushroom “dictionary”, the author counted up to 50 types of signal sequences, which he combined into “words”, consisting of an average of six “letters”.

Previous research on this topic has shown that some fungi (like button mushrooms) send electrical signals through the underground mycelium network to other fungi.

Scientists who have studied this process compared it to the spread of excitation (the so-called action potential) in the nerve cells of animals and humans.

In addition, electrical activity in mycelial filaments has previously been shown to increase when a fungus encounters a food source, which some researchers believe is a form of communication between fungi.

Andrew Adamatzk, director of the University of the West of England’s Unconventional Computing Laboratory, seems to think so too.

He decided to take a closer look at such signals to see if they could be some form of human-like language. The scientist chose four types of mushrooms: military cordyceps ( Cordyceps militaris ), ghost mushroom ( Omphalotus nidiformis ), winter honey agaric ( Flammulina velutipes ), common slit-leaf ( Schizophyllum commune ), and recorded the electrical signals generated by them.

Prof. Adamack then analyzed the recordings for patterns and found that the bursts of electrical activity were grouped into sequences of signals.

After combining the signals into “words”, the author of the work analyzed the linguistic and informational complexity of these bursts of activity. It turned out that the size of the “vocabulary” of mushrooms can reach 50 “words”, although only 15-20 of them are most often used. 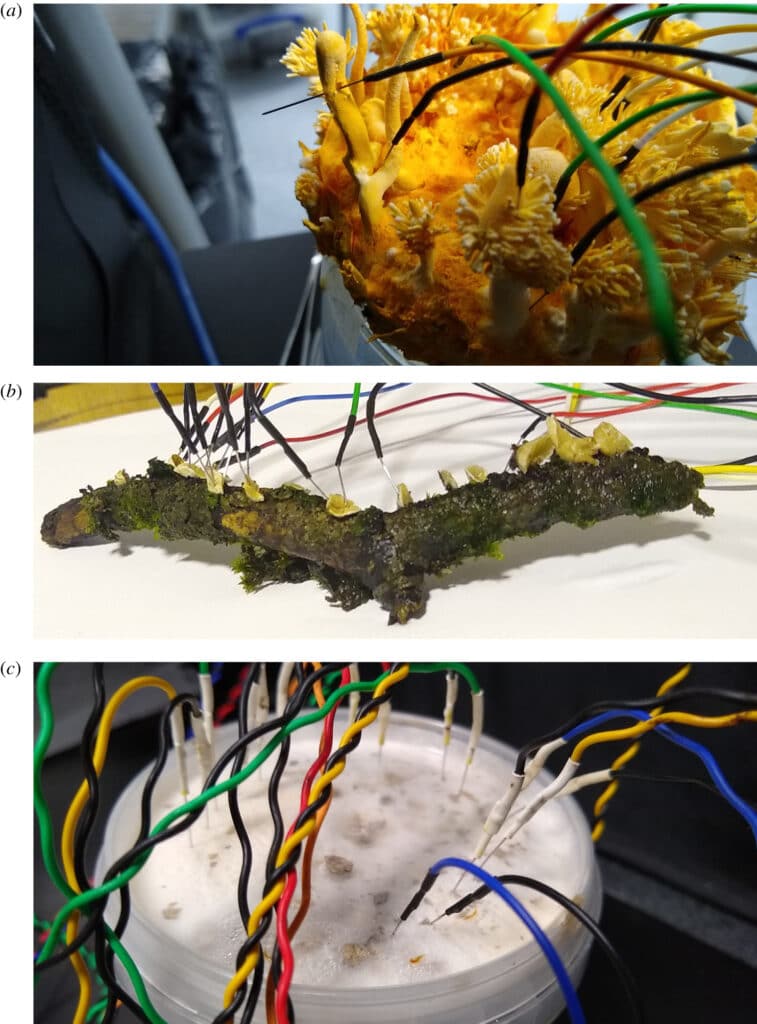 Photographs of the process of measuring electrical signals by means of electrodes inserted into military cordyceps (a), common slit-leaf (b), winter honey agaric (c)

At the same time, the characteristics of electrical signals for each type were specific: for example, the signal amplitude varies from 0.03 to 2.1 millivolts. The slitwort and the ghost mushroom had the largest vocabulary, and the average length of a “word” for the four studied species was 5.97 letters. Adamatzk suggests that the purpose of these electrical signals is to help the fungus maintain their group integrity, and it may also be a means of signaling the discovery of food sources and/or nearby repellents being sprayed.

The professor readily admits that the signals may have nothing to do with communication at all: they probably also arise simply from differences between a pair of consecutive signals in the mycelial filaments.

Nevertheless, the scientist is sure that whatever the purpose of the signals, they are not generated randomly.