(ORDO NEWS) — Flying saucers have long surprised no one, which cannot be said about unidentified floating objects. One of these objects was discovered by a resident of the Kuban on the Black Sea coast. He found a strange design, took pictures and posted it on social networks. Users are trying to establish what it is and put forward a variety of versions. 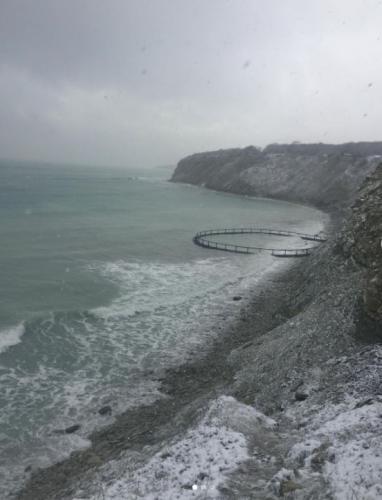 A user of the social network Instagram under the nickname taskaev_m was walking along the beach in Novorossiysk and suddenly noticed an incomprehensible structure on the Black Sea coast. The man photographed her and posted the photo on February 15.

The item is large enough and ring-shaped. It resembles a certain wheel that has sides. Users immediately began to assume a variety of versions. Jokes about the aquadiskotheque did not stand aside. Some commentators immediately suggested that the object is of extraterrestrial origin. Some users thought that fish can also hold a meeting, and this is a special fence that holds the protesters back.

But still, in the end, it was possible to establish what kind of object it was. The item turned out to be a special cage used for breeding oysters and mussels. Such devices are installed in the coastal part of the sea in order to grow various kinds of marine life in them. Most likely, the cage was washed ashore by strong waves.

Mankind is near the line: outbreaks of “wet heat” begin to exceed the limits of the body’s endurance

Mankind is near the line: outbreaks of “wet heat” begin to exceed the limits of the body’s endurance