(ORDO NEWS) — Archaeologists have examined two metal celts that a man accidentally found while walking along the coast of Lake Baikal.

These items were made of pure copper and were used as axes or adzes. According to scientists, the Celts, made in the Scythian-Tagar tradition, belong to the culture of slab graves, which existed in the Baikal region about 2778-1998 years ago.

This is reported in an article published in the journal Archeology, Ethnography and Anthropology of Eurasia.

On a rather vast territory, including the Baikal region, Central and Eastern Mongolia and Northwestern Manchuria, in the Late Bronze and Early Iron Age (mid-2nd – late 1st millennium BC) there was an archaeological culture of slab graves.

Scientists know it not only for its characteristic burial structures (rectangular fences made of vertically placed slabs), thanks to which the culture got its name, but also for altars, deer stones, sites, rock carvings, treasures, as well as numerous random finds.

Most researchers associate this culture with the ancient Mongolian tribes, who were mainly engaged in nomadic and semi-nomadic cattle breeding.

Around the 8th century BC, the carriers of the culture of slab graves penetrated the territory of the Cis-Baikal region, bringing with them a manufacturing economy and the use of iron products and occupying mainly settled areas.

However, little is known about this, since most of the burials of this culture were destroyed in antiquity. Accompanying material in these graves, as a rule, is not numerous. It is usually represented by animal bones, stone tools, single objects made of bronze, iron or bone, such as knives, arrowheads, plaques or beads.

Alexey Novikov (Alexey Novikov) and Olga Goryunova (Olga Goryunova) examined two metal celts, which a man accidentally found while walking on the coast of the Small Sea of ​​Lake Baikal under a rectangular stone. They are wedge-shaped tools that were used as axes or adzes.

Both of these artifacts were cast in detachable double-leaf molds and decorated with relief ornaments. Near the upper edge of the products, there is a narrow rim around the edges, and on the wide edges there are holes that were necessary for good fixation of the cores.

Archaeologists noted that they do not know of complete analogues of these tools. But on Baikal, whole and fragmented bronze Celts have already been found, for example, at the Katun site, on Sosnovy Island and in burials in Kurla Bay. 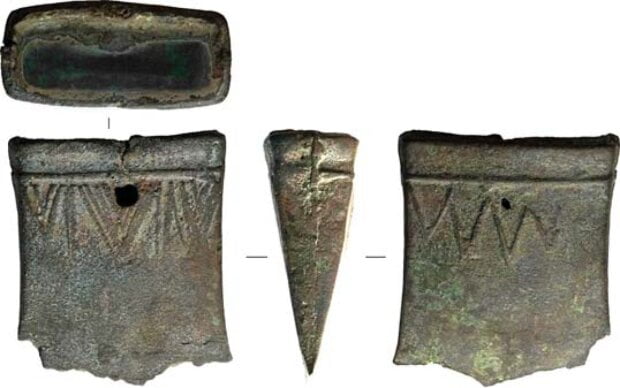 During this period, the culture of slab graves was widespread in the territory of the Baikal region, which, judging by radiocarbon dating, existed about 2778–1998 years ago.

At its monuments, scientists have previously found items made of copper and bronze, which were made in the Scythian-Tagar tradition, for example, figured plaques.

An examination of the area where copper Celts were found showed that they are unlikely to be associated with any destroyed burial or settlement complex. Probably, these are things hidden in a cache, since metal artifacts, due to a lack of raw materials, could be valuable tools.