(ORDO NEWS) — Using the ground-based radio telescope ALMA, astronomers have determined the diameter of the nucleus of the giant comet C/2014 UN271 Bernardinelli-Bernstein, which arrived from the Oort cloud. It turned out that the object is really large – its diameter is 137 kilometers.

Comet C/2014 UN 271 Bernardinelli-Bernstein was discovered last summer by Pedro Bernardinelli and Gary Bernstein as part of a search for objects outside the solar system on DES (Dark Energy Survey) camera images taken since 2013.

It was first seen in images taken in October 2014, when it was at a distance of 29 astronomical units from the Sun, and later its movement could be traced in images from other telescopes until October 2010.

Initially, the researchers thought they had discovered a new dwarf planet, but later signs of cometary activity were found near the object. Now C/2014 UN 271, according to scientists, is a giant comet that was ejected from the interior of the Oort cloud and never got closer than 17-21 astronomical units to the Sun.

The last observation, which was carried out by a group of astronomers on August 8, 2021, showed that the diameter of the comet’s nucleus was 137 ± 17 kilometers, and the geometric albedo (reflectivity) was 5.3 ± 1.2 percent.

These results confirm the comet’s status as the largest comet and the largest Oort cloud body discovered so far. The nucleus of C/2014 UN 271 is almost twice as large in diameter as that of Hale-Bopp and larger than that of active centaurs, and its albedo is similar to other, usually much smaller, comets.

The low albedo may be due to the presence of organic matter on the surface of the nucleus, as well as darkened compounds such as sulfides.

It is expected that further observations, including the use of the James Webb telescope, will help to study the composition and properties of the comet in more detail, as well as to trace the evolution of the nucleus as it approaches the Sun. 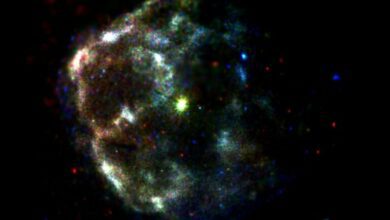