(ORDO NEWS) — The Martian atmosphere in its current state is not at all suitable for earthlings. It is very thin, more than 100 times less dense than Earth’s, and consists mainly of carbon dioxide.

Any person who tries to breathe it will soon find that they are not breathing at all.

But in this dusty, dry, alien world, a small device, a little larger than a briefcase, reliably pumps out oxygen suitable for breathing from the Martian atmosphere.

This is the first demonstration of in situ recycling of resources for human use on another planet – creating a way to produce breathable air for a human mission to the red planet.

From February 2021, when Perseverance landed, to the end of 2021, MOXIE produced oxygen seven times – and will continue to do so, the researchers say.

“This is the first demonstration of the actual use of resources on the surface of another planetary body and their chemical transformation into something useful for humans,” says former NASA astronaut and MOXIE Deputy Principal Investigator Jeffrey Hoffman of the Massachusetts Institute of Technology.

“In that sense, it’s a historic event.”

The production of oxygen by electrolysis is nothing new. The International Space Station, for example, uses electrolysis to split water into hydrogen and oxygen and thus replenish breathable air.

However, on Mars, water may be too valuable to use in this way if there is another method. 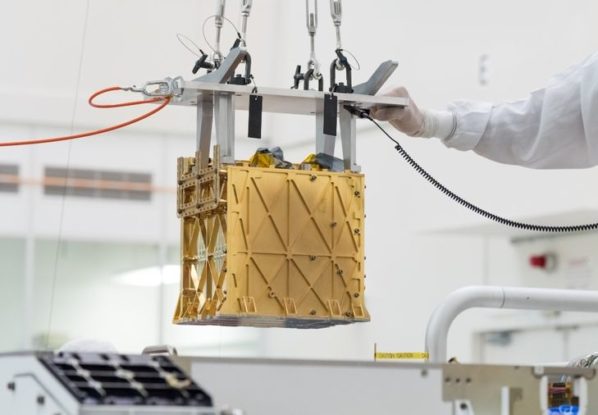 Fortunately, oxygen is a component of many compounds, including carbon dioxide, which makes up about 96 percent of the atmosphere on Mars: a molecule made up of one carbon atom and two oxygen atoms.

The electrochemical reduction of carbon dioxide to its constituent elements is well studied, known and understood; the challenge was to develop a device here on Earth that could do it on Mars with the ingredients at hand.

The production of oxygen in MOXIE is a multi-step process.

It first draws in Martian air through a filter that purifies it. This purified Martian air is then compressed, heated, and sent to the Solid Oxide Electrolyzer (SOXE). The electrolyzer breaks down carbon dioxide into carbon monoxide, which is released back into the Martian atmosphere, and oxygen ions.

The oxygen ions are then recombined into O2, or molecular oxygen, which is then measured for quantity and purity before being released back into the atmosphere.

This process, as scientists have established, reliably led to the production of oxygen suitable for breathing. After several hours of heating, the device operates for 1 hour per experiment, after which it turns off. For 1 hour of operation, MOXIE can produce up to 10 grams – about 20 minutes of oxygen, suitable for the breathing of one astronaut.

In each of the seven launches, MOXIE produced between 5.4 and 8.9 grams of molecular oxygen, for a total of 49.9 grams.

Over the course of seven launches, MOXIE was able to produce oxygen in a variety of conditions: day, night, and throughout the year.

“The only thing we haven’t demonstrated is working at dawn or dusk, when the temperature changes significantly,” says MOXIE principal investigator Michael Hecht of the Massachusetts Institute of Technology’s Haystack Observatory.

“We have an ace up our sleeve that will allow us to do this, and once we test it in the lab, we can reach the last milestone to show that we can really work at any time.”

Ideally, of course, the goal is a life support system that can run continuously, since that’s how humans need to breathe. And it should be much larger than MOXIE: A small crew of astronauts, Hecht said last year, would need about one metric ton of oxygen to breathe for one year on Mars.

And that’s not counting the oxygen needed for fuel on the way home – in total, according to the team’s calculations, the mission will need about 500 tons of oxygen.

What the team has learned in the first year of MOXIE will serve as the basis for the development of a larger system…but that’s a long way off.

The next experiment will be carried out at the time of the year when the atmosphere is at its densest. Then, according to the team, they will press the device with all their might, trying to produce as much oxygen as possible.

This will not only show what MOXIE is capable of, but also demonstrate its limitations, which in turn will help create a more reliable vehicle for a possible crewed mission to Mars.

And this will solve a significant part of the puzzle associated not only with making the inhabited place more hospitable for people, but also ensuring their safe return home.

“To support a human mission to Mars, we have to bring a lot of things from Earth, like computers, space suits and habitat,” says Hoffman.

“But good old oxygen? If you can get it there, act – you’re way ahead of the curve.”