(ORDO NEWS) — The surf brought to Liverpool beach a rather creepy creature that even scientists are unable to identify. The creature was named “Ainsdale Anomaly” and is currently being investigated by caring specialists and citizens.

The monster is 4.5 meters long. Eyewitnesses could not see the head. From other oddities – attached another creature through the umbilical cord. Most likely, the creature was going to give birth. This is more of a guess, so it cannot be 100% confirmed. 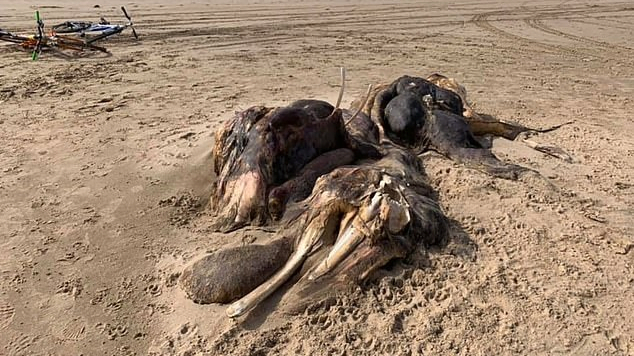 The appearance of the creature was such that it was as if a whale had swallowed a cow that had eaten a dolphin before its death, noted one of the vacationers on the beach. Another beach visitor shared about the unbearable stench that made her head spin. Many couldn’t get too close because of her. People had a gag reflex every time the wind blew in their direction.

When photos of the creature were uploaded to the Web, users began to wonder who was on them. Assumptions were different: a cow, a thawed mammoth, etc. According to a biologist from the environmental department, a badly decomposed whale could actually be thrown ashore.

The spine protrudes through the flesh, the body is severely deformed. Perhaps these are generally three different connected parts of a whale. The discrepancy lies only in the fact that people saw wool on the body of the creature.

Pictures of the find were transferred to the Department of Marine Biology at the University of Liverpool. Perhaps scientists will figure out the issue and provide us with a normal explanation for the find.