(ORDO NEWS) — The ruins of the ancient Mayan city of Tikal are still present in the jungles of Guatemala. This settlement is considered to be the most studied among all those that were created by the popular civilization. Excavations in this area have been going on for over 70 years.

In 378 AD, Tikal conquered the army of the largest city in the region, Teotihuacan. It was located in the same place as modern Mexico. For all the time that archaeological excavations have been carried out, experts have found a huge amount of evidence of how Teotihuacan influenced Tikal.

But some time ago, an incredible discovery was made. Archaeologists have discovered buildings in Tikal that are an exact copy of those that were built in Teotihuacan. The results of the study were published in the scientific journal Antiquity.

The experts drew attention to the hills that are located next to the ancient city. They used special equipment to examine them and found structures underground that were different from those of Tikal.

Further excavations revealed a small copy of the Teotihuacan citadel. Stephen Houston noted that not even the materials were used for the construction that the Maya usually used for their buildings. Also, scientists drew attention to the fact that the citadel in Tikal repeats the original in everything, up to the unusual orientation of the building at 15.5 degrees towards the northeast. 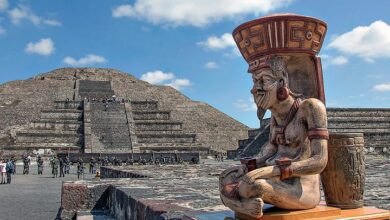