(ORDO NEWS) — Scientists have solved the mystery of the spinning ball of bluish light that slowly swept across the sky over Alaska last month, stealing the show from the famous northern lights: The unusual ball was most likely the wreckage of a Chinese rocket that flew over the earth.

Eyewitnesses across the state noticed the strange phenomenon on March 29 around 5 a.m. local time. “It felt like something was spinning inside him,” Lesley Smallwood, a Fairbanks resident who witnessed the event, told local news channel KUAC. The orb appeared much larger than the full moon and moved from the northeast to the southwest, she added.

An automatic camera trap captured an image of a ball floating in front of the northern lights. The camera trap, operated by The Aurora Chasers Ronn Murray and Marketa Murray, a husband and wife from Fairbanks who run aurora photography tours, regularly photographs the sky every 45 seconds so people can see the northern lights in near real time.

The camera took six pictures of the orb, which means it was visible for at least four and a half minutes.

“It doesn’t look like it blew across the sky,” Smallwood told KUAC. “He didn’t seem to be in a hurry.”

The ball appeared and disappeared without any real explanation. However, after analyzing the photographs, the scientists determined that the large blue orb was most likely the result of a Chinese rocket.

“I’m sure what people saw was a drop of propellant from a Chinese rocket stage,” Jonathan McDowell, an astronomer at the Harvard-Smithsonian Center for Astrophysics in Massachusetts, told KUAC.

The balloon matched the flight path of a Chinese rocket that carried two satellites into orbit, he added. It was a two-stage Long March 6 booster launched from Taiwan, according to McDowell’s social network.

The rocket likely blasted the remaining propellant into space, where the propellant froze and spread into a large ball lit by sunlight, McDowell told KUAC. “This cloud is probably hundreds of kilometers across, which is why it looks so big,” he added.

Other scholars agree with McDowell’s explanation. “A glowing cloud of gas lit by the sun would look exactly like this,” Mark Conde, a physicist at the University of Alaska Fairbanks, told KUAC

. The rocket was supposed to spin “side to side, spewing propellant like a garden hose,” McDowell said.

This is not the first time this has happened. In October 2017, an even larger blue orb was seen in the skies over Siberia, Science Alert reported. At that time, the frozen fuel was left over from tests of Russian military missiles in the area. 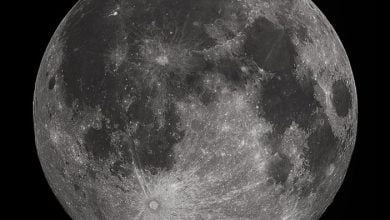