(ORDO NEWS) — The Predatory Shark is a simple and effective hunting and killing device that has evolved over many millions of years.

To learn more about its interactions with the prey, scientists attached video cameras to the tiger shark and followed the process of hunting from the first person.

Many sharks represent the archetype of an efficient marine predator that can afford to attack anyone and everything indiscriminately.

They belong to an ancient class of animals (cartilaginous fish), have been considered a thunderstorm of the seas for more than 400 million years, and since then have slightly changed their design.

What makes these rather primitive fish such successful predators? A new article in the Journal of Experimental Marine Biology and Ecology provides valuable information about this as it describes the life of sharks in the first person.

The subjects of the research are several tiger sharks ( Galeocerdo cuvier ) that have been carefully fished out of the sea west of Australia and fitted with high-tech equipment.

An autonomously working video camera and a sensor that reads movements in 3D were attached to the body of each predator. After such improvements, scientists released the fish back into the sea and began to observe their life.

The main storyline of this science show turned out to be the interactions of tiger sharks with one of their main victims – sea turtles. In addition to the image, the biologists had motion sensor data at their disposal, which made it possible to accurately reconstruct the trajectories of both predator and prey.

“When we looked at the raw video, we were surprised to see that the tiger shark regularly swims past turtles sitting on the reef that could easily become prey,” said study leader Dr. Laura Ryan (Laura Ryan) from Macquarie University School of Life Sciences ( Australia).

“However, when we took into account how the tiger shark itself sees this picture, we became convinced that the turtle, especially the motionless one, is really difficult for it to see.”

The fact is that biologists have analyzed the structure of the eye of a marine predator and how well the shark sees.

“In terms of visual acuity, the tiger shark is much inferior to both humans and video cameras. It turns out that the shark has to use all aspects of the sea turtle’s movement that it can see, ”the scientist continues.

The authors noted that it is much easier for sharks to distinguish turtles that clearly stand out against the background – they carefully examine them.

Starting interaction with the prey, the shark switches its behavior into a “predatory mode”: it slows down and starts to wind, so it is easier for it to understand what it is dealing with. At the same time, despite poor eyesight, the shark still relies on its own eyes.

Biologists have concluded that the tiger and other predatory sharks like it are not adapted to the action-packed pursuit of the victim at maximum speed.

It is rather about a leisurely predator pursuing a prey to match itself – in the described case, a turtle. This is in good agreement with the fact that the tiger shark is adapted to life in conditions of lack of food, and therefore saving energy and strength even when hunting.

Turtles can turn off cellular aging

Turtles can turn off cellular aging 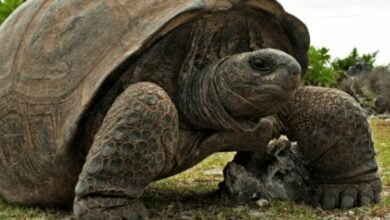 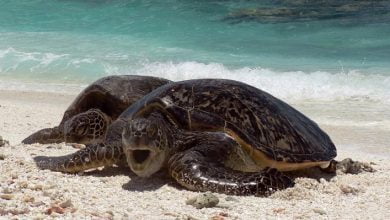