(ORDO NEWS) — A six-year-old boy walked along the beach in the UK with his father, collecting shells and fossils. An ordinary day ended with an incredible find: the boy found an extremely rare megalodon tooth.

A six-year-old boy named Sammy Shelton (Sammy Shelton) found a massive megalodon tooth on the English beach of Bowsey Beach. This tooth, 10 centimeters long and almost the size of a child’s palm, belonged to the largest shark that ever lived on Earth.

The photograph was identified by evolutionary biologist Ben Garrod of the University of East Anglia in Norwich, who also noted that the artifact is in excellent condition.

“It belonged to a megalodon, the largest shark ever to have lived, and its teeth are not often found on the UK coast. Maybe only a few copies a year, but this is a particularly good copy, in very good condition, while other finds are usually very worn,” commented the professor. 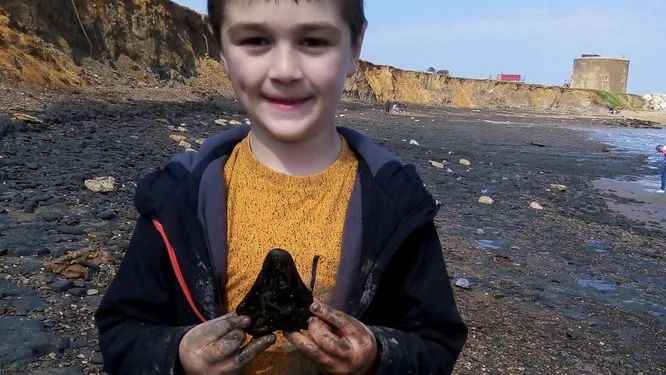 The giant shark megalodon (Otodus megalodon) has long been at the top of the food chain, feeding on whales and dolphins.

Scientists are still arguing about the exact size of this top predator, but most likely they grew at least 15 meters in length. It is believed that the decline in the whale population was one of the reasons for the extinction of megalodons.