(ORDO NEWS) — This copper awl, the earliest metal artifact found in the Southern Levant, indicates that the complex metallurgy of the Late Chalcolithic developed from an older tradition.

According to the current state of research, the initial appearance of copper in the Southern Levant dates from the late Eneolithic period (Ghassoul culture, ca. 4500-3800 BC).

Lost wax casting technology, as well as electrum and gold products from the Nahal Qana cave, make the southern Levant a major center of metallurgy in the Middle East.

However, no data on the history of this technology in the region has been available so far. A newly discovered cast metal awl found in a grave associated with a primary burial inside a mud-brick tomb at Tel Tzaf in the central Jordan Valley, Israel reveals new evidence for these important early stages.

Sophisticated architectural structures made of mudbricks include courtyard buildings that combine rectilinear rooms, rounded rooms and silos, as well as many kitchen rooms. 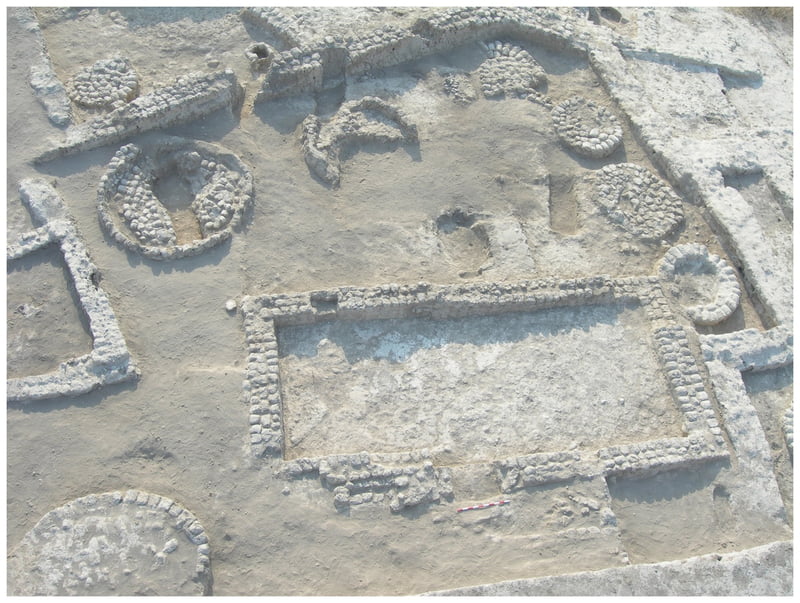 The silos found in the yards have reached a capacity estimated at 15–30 tons of grain, far exceeding the nuclear family’s annual requirement, clearly indicating surplus accumulation on an unprecedented scale in the ancient Near East.

The metal object is an elongated cast copper pin with a rounded cross section. This is 41 mm. long, and its maximum diameter (at the base and in the middle of the length) is 5 mm.

The diameter of the awl at its tip is 1 mm. The color on the outside is green due to oxidation and corrosion, while the core is reddish.

The narrower tip bears traces of rotational movement, and on the base, at the opposite end, the remains of a wooden handle are noted. 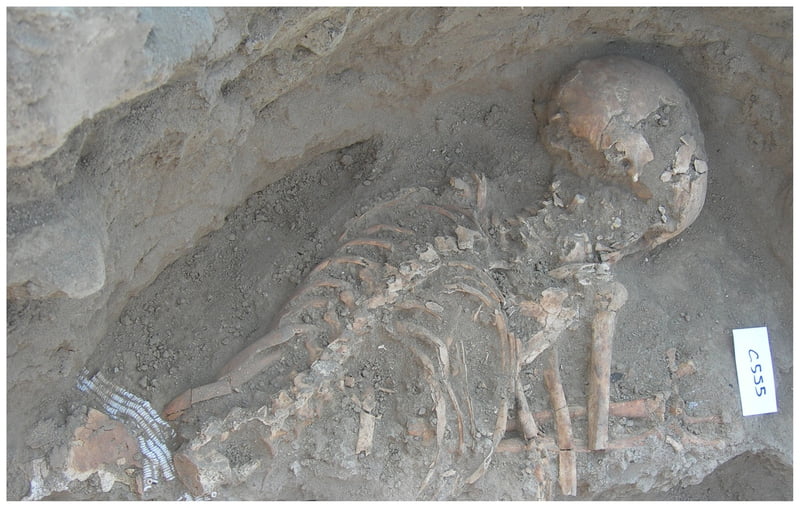 Product composition results show copper with 6% tin (Sn) and 0.8% arsenic (As) and low traces of lead (Pb) and iron (Fe).

The ratios between the elements are not the same as in the original metal, and could be changed during corrosion.

Nevertheless, the appearance of tin, even highly enriched during corrosion, raises important questions.

Until now, in the Late Chalcolithic or Early Bronze Age of the Southern Levant, copper objects of this chemical composition have not been found, and the composition of the metal of this object, which includes tin, does not correspond to the known compositions of local native copper.

In fact, objects with a similar chemical composition have been recorded in the Southern Levant so far only from the Middle Bronze Age, 2nd century and later periods.

The copper awl from Tel Tzaf is an exceptional example of the metallurgy of the Southern Levant at the end of the 6th – beginning of the 5th millennium Kal. BC. The available contextual evidence clearly indicates that the awl, grave, and building belong to the same Middle Chalcolithic period.

Days get longer when the wind blows

Days get longer when the wind blows