(ORDO NEWS) — Initially, the legendary dragon slayer with a sword was not the knight Orlando, saving Angelica, and not Sigurd, killing Fafnir… And not even the Archangel Michael or St. George. It goes back much further than any of the above… straight back to the ancient world.

In fact, the ancients had a fairly well-documented obsession with snakes, especially the large, fire-breathing, winged varieties. From India to Egypt to Peru, many cultures around the world have had some version of the serpent myth.

However, it was in classical Greece that the elements of this story were brought to perfection (at least in our opinion).

There, the antagonist of the dragon-serpent was none other than the primeval water god Poseidon, a close relative of the earth goddess Gaia. He was, one might say, from the beginning of their time.

Not much, according to ancient Greek mythology, which has provided us with some fantastic examples of monster-slaying champions.

So, without further ado, let’s take a look at five of the original, weapon-wielding dragon slayers from Greek mythology…

Our first hero was not just a man, but a god. It is best to start with one of the most famous and beloved Olympians – Apollo, the god of light and the sun, truth and prophecy, healing, plague, music, poetry, etc., etc. 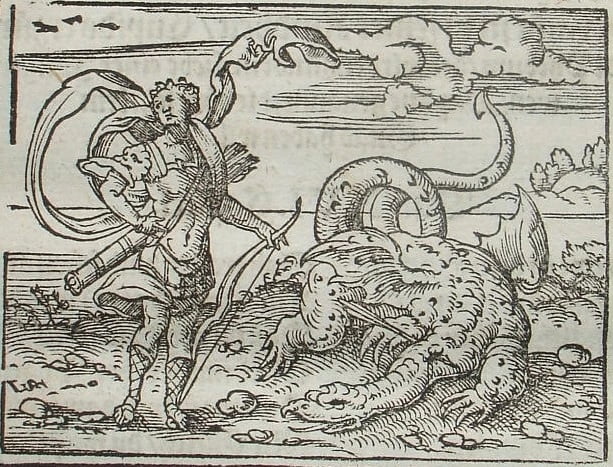 Its history begins with its house of worship: the Temple of Apollo at Delphi. Depicted on coins for centuries and of great importance to every culture that has known it, the temple has been rebuilt five times in its thousand-year history.

In fact, the earliest version of the temple predated Homeric poetry and was most likely dedicated to an earthly deity not so unlike our antagonist Poseidon, who was considered the oldest possessor of the oracle.

Ironically, it was the “earthshaker” Poseidon who was supposedly responsible for the earthquakes that destroyed the temple again and again.

According to mythology, the source near the temple was guarded by a large python or dragon, which Apollo killed, freeing people from fear of the earth and its power.

After the triumph of Apollo at Delphi, a snake appeared on the traditional omphalos (a rounded stone artifact and the early center of the temple), coiled around it.

This made it the symbol of Apollo, the dragon slayer, god of wisdom and healing. He passed on the last trait to his son Asclepius, who, according to Ovid, turned into a snake and founded Rome.

The second dragon slayer on our list is Cadmus, a Phoenician prince who introduced the alphabet to Greece around 2000 BC.

Going in search of his sister, Europa, he stopped at the Temple of Delphi to consult with the oracle of Apollo, which led him to found the city of Thebes.

During the construction of the Theban Temple, Cadmus’ helpers were killed by a dragon while they were trying to draw water from a nearby spring.

(Athena told Cadmus to kill the dragon and sow its teeth into the ground like seeds. From these seeds grew a ferocious army.

Following another command from Athena, Cadmus threw a stone at the center of the advancing warriors, causing them to attack each other until only five remained.

With these people, or Spartans, he was able to complete the citadel. 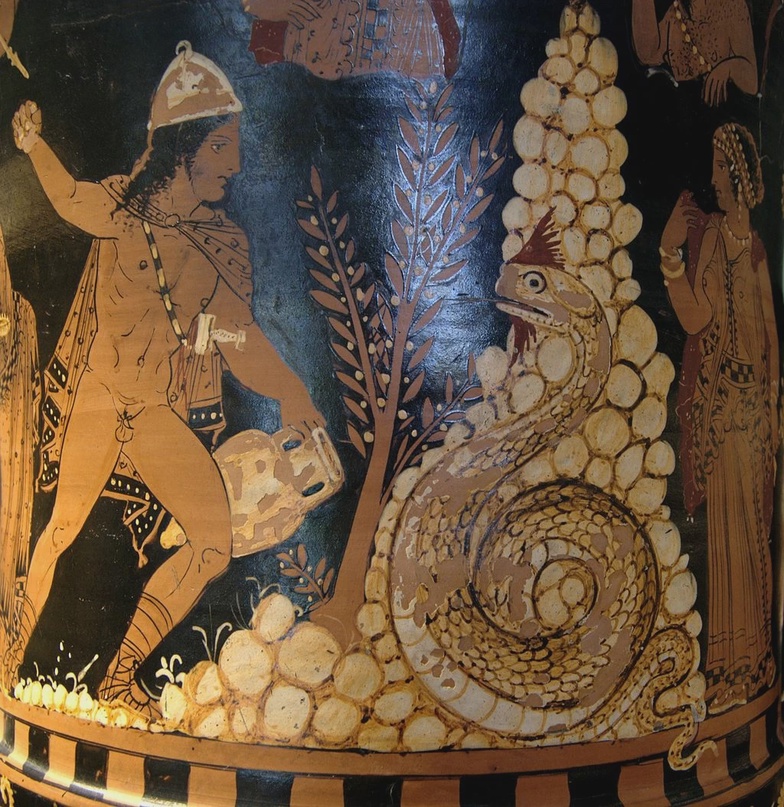 Unfortunately for Cadmus, it wasn’t just a dragon – it was sacred to the god Ares.

After his death, Cadmus was forced to serve his sentence for eight years, but, nevertheless, he was tormented by the fact that he was killed.

Cadmus’ family, as well as the city of Thebes, were cursed with countless tragedies, including the death of his four daughters and the fate of his grandson Oedipus.

In the end, overwhelmed by misfortune, he exclaimed that if the gods love snakes so much, then he would like to become one of them.

Ovid claimed that Cadmus and his wife Harmonia turned into reptiles and crawled away into the forest together. However, other versions of the myth say that the gods turned them into snakes as punishment.

Our next dragon slayer looks like a comic book hero. His team, the Argonauts, was a seafaring team that included Hercules, Asclepius, Orpheus, Atalanta, and dozens of others.

These big-than-life guys accompanied Jason on his heroic quest for the Golden Fleece, which, of course, was guarded by a dragon. 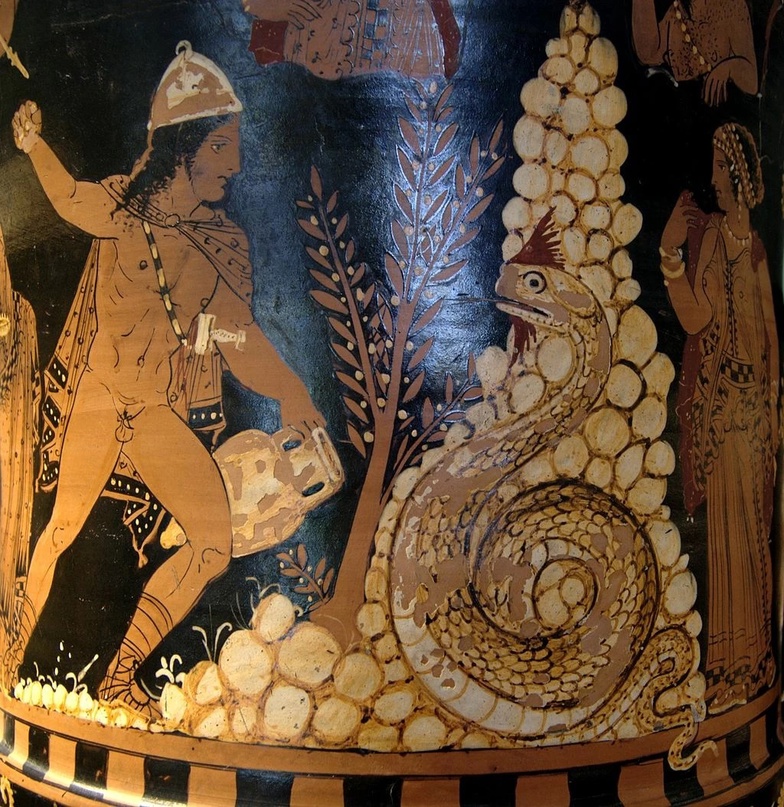 Jason was sent by Poseidon’s son, Pelias, to retrieve the Golden Fleece. Along the way, he received additional tasks: plow the field with fire-breathing oxen, steal a tooth from a dragon, and kill the dragon guarding the fleece.

Luckily for Jason, his beloved Medea was trained in the dark arts of Hekate and gave him an ointment that would protect him from oxen burns, as well as an herbal decoction with which he could put the dragon to sleep.

He did as he was advised and stole a tooth from a sleeping monster. Then, like Cadmus, he sowed the dragon’s tooth in the field, which grew into an army…and, again, like Cadmus, he threw a stone into the middle of the crowd.

Not understanding where the blow came from, the army again took up arms against each other and self-destructed.

In one version of this myth (and there are many), Jason is swallowed and then regurgitated by a dragon, and he is reborn as a real hero.

The next hero is Perseus, the legendary founder of Mycenae and the Danaan Perseid dynasty. In fact, the exploits of Perseus were so majestic that they served as the basis for the myth of the twelve Olympians, the first heroes of Greek mythology.

Of his conquests, one of the most memorable is the beheading of Medusa, the snake-haired gorgon, with Athena’s polished shield. After that, Perseus dealt with another monster – the sea serpent Ket, sent by Poseidon.

This time, he had to save Andromeda, his reward for killing both dragons.

It is interesting to note that Cetus is essentially another aspect of Poseidon (being sent by him), and Medusa is often considered the representative of nature’s wrath, for which the sea god is infamous.

The most prominent of the Greek dragon slayers, Heracles, strangled his first snake when he was still an infant in his cradle.

Demonstrating strength, courage and resourcefulness, he is considered the greatest of the Greek heroes, especially among the many Roman emperors who identified with him. 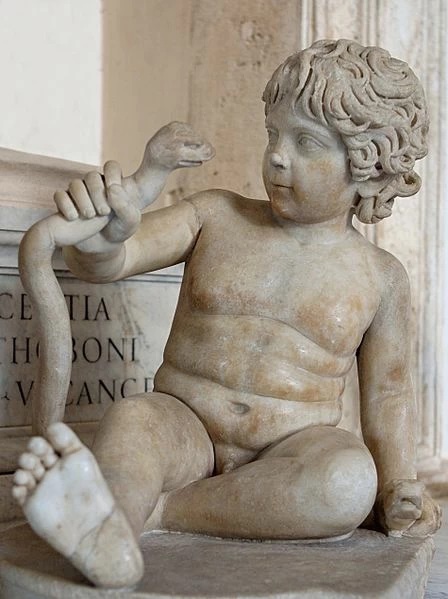 Hercules in Greek is another name for the sun. He is the ruler of the zodiac, who opens the new season, constantly destroying the old one. During his twelve labors, he defeated two many-headed snakes, including the hydra and the palm.

In an interesting connection with the story of Jason and Perseus, Hercules was instructed at the tenth labor to catch the “golden-haired” cattle of the three-headed Geryon (the son of Chrysaor, who, like his grandmother Medusa, lived on an island at the far end of the western sea).

In addition to mirroring Perseus’ victory over Medusa, Hercules’ slaying of Gerion, like all his writings, repeats the archetypal pattern of the hero’s journey to destroy the metaphorical dragon.

This, of course, begs the question: what constitutes the slaying of a dragon?

Of course, we can never be sure, but it can be seen as a symbolic act of taming the wild, the natural, the demonic. Living in water, but breathing fire, capable of both swimming and flying, the dragon embodies all the natural forces that the ancients feared. To kill them is to kill fear itself.