A 45,000-year-old log discovered during the construction of a new power plant could explain a mysterious global event that dramatically changed Earth’s climate.

A 60-ton log was found nine meters underground in Ngawa on New Zealand’s North Island.
Top Energy, which is building the power plant, began earthworks in 2017 and dug out 900,000 cubic meters of soil before hitting a 16-meter log.

University of Waikato scientist Alan Hogg determined that the tree appeared 40,500 years ago, according to the NZ Herald. 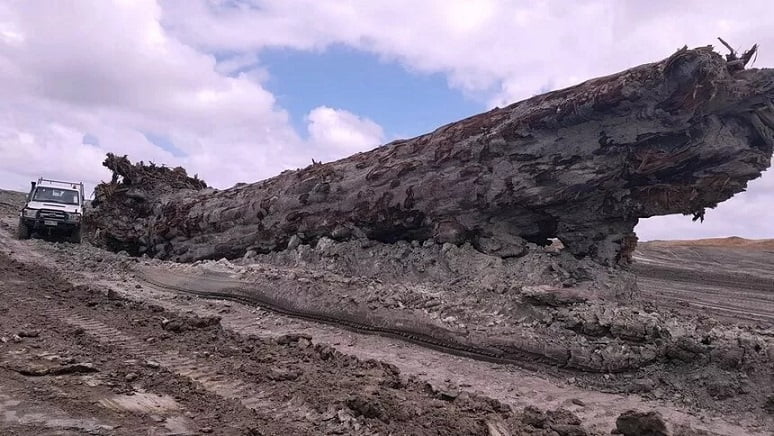 It is not known exactly when this event occurred, but it is believed that approximately 41 – 45 thousand years ago.

The scientists hope that studying the levels of radioactive carbon in tree rings will allow them to determine when the reversal occurred and how long the process took.

Scientists believe that the reversal of the Earth’s magnetic poles and the accompanying drop in the strength of the magnetic field, allowing more solar radiation to reach the Earth’s surface, could have a significant impact on climate.

The 16-meter log was transported to nearby Ngawa Marae (a sacred place for the locals), where a ceremony was held to transfer the ancient tree to the care of the Maori community.

Transporting the tree was a major undertaking: to transport it, sections of about 1.5 meters long had to be cut off on each side, with one stump weighing 28 tons.

Three sections were lifted by two 130-ton cranes and then transported by truck along the highway. The entire operation took four hours.

Giant rotating lunar base will provide artificial gravity like on Earth

Giant rotating lunar base will provide artificial gravity like on Earth