(ORDO NEWS) — You thought you knew about solar cycles? Think again. A new paper published in the journal Frontiers in Astronomy and Space Sciences confirms there is more to solar activity than the well-known 11-year sunspot cycle.

Data from the Wilcox Solar Observatory (WSO) at Stanford University show that two solar cycles occur at the same time, and neither lasts 11 years.

We call this the “extended solar cycle,” says lead author Scott McIntosh of NCAR. “The Sun has two overlapping cycles of activity, each lasting about 17 years.”

Solar physicists have long suspected that this might be true. References to “overlapping solar cycles” can be found in scientific literature as early as 1903. A drawing from a new article in Frontiers magazine seems to confirm this conjecture definitively. 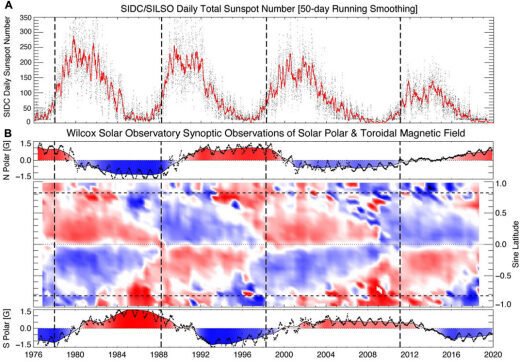 The top figure shows the number of sunspots since 1976. The curve rises and falls every 11 years, which explains why everyone believes that the solar cycle lasts 11 years. The figure below shows what actually happens.

“The red and blue colors represent magnetic fields on the surface of the Sun,” explains Stanford University’s Phil Scherrer, co-author of the paper who works closely with data from the Wilcox Solar Observatory. “We have been observing these fields since 1976, collecting unique long-term data on solar magnetism.”

Wilcox’s data show not one but two coexisting types of activity. They intersect in such a way that any connoisseur of music will recognize them: The sun “sings rounds” – the Infinite canon.

A round is a piece of music in which several voices sing the same melody but start the song at different times. Imagine a group of children singing “Boat, swim, swim, swim.”

Half of the children start first; the other half starts 5 syllables later. The sun does the same with its magnetic fields, only instead of 5 syllables (“Sail boat, swim, swim”) the gap is just over 5 years. 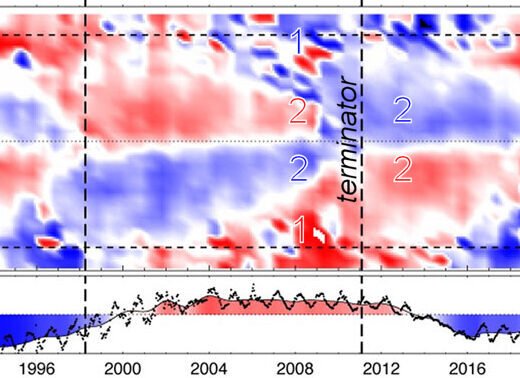 In the enlarged image above, two representative cycles are labeled “1” and “2”. Most of the time both cycles are active, but not always.

When one of them stops, the other completely takes control of the Sun, and the number of sunspots increases dramatically. At this time, the solar maximum occurs. The Macintosh calls this transition the “Terminator”.

“The extended solar cycle may be telling us something important about what’s going on deep inside the sun, where sunspot magnetic fields are generated,” Mackintosh says.

“This poses significant problems for the prevailing theories of the dynamic motion of the solar cycle.”