(ORDO NEWS) — At the word “drought” most people hardly think of something particularly scary. But prolonged droughts can cause harm comparable to the worst cataclysms, cause crop failure and famine.

Farmers are afraid of them even today, and even a hundred years ago there was simply no worse word for them. What droughts in the history of mankind were considered the most terrible? Drought in Illinois. 1988-89 years. One of the worst droughts in US history, causing $60 billion in damage. Accompanied by mass destruction of corn and monstrous fires that led to the death of thousands of people. Drought in Spain. year 2014. One of the worst disasters that the country has experienced over the past 150 years. Some experts predicted that Spain could completely lose its supply of drinking water, and the world was threatened with a severe shortage of olive oil. The Great Drought in Western Australia. 1829 This catastrophe did not spare a single Australian farmer, destroying the entire grown crop that year. People were forced to leave western Australia in search of a new place to live. Drought in the Horn of Africa. 1888 The Horn of Africa itself is a very dry region, but that year was especially terrible. Due to the complete lack of precipitation, famine began, taking the lives of about a million people in Ethiopia, Sudan and Somalia. Texas drought. 2010-11 years. While it may not be as big as the 1988 drought, it still managed to deal a heavy blow to a key agricultural US state. Damage is estimated at $5.2 billion. Drought in the USA. 1983 A late spring across the Midwest and the Great Plains that year caused a sharp rise in summer temperatures, stagnating in the 40s for months on end. Many people died from the heat, to say nothing of the crops. Drought in India. 1630-32 years. It caused a terrible famine throughout the country and is still considered the worst drought in its history. In two years of massive crop failure and terrible heat, more than two million people died. Drought in Vietnam. 1944 That year in Vietnam was a real nightmare for farmers. First, a drought hit, destroying about 20% of the crop, then parasites came, a flood happened, and finally a war. Drought in Australia. 1850 One of the most severe droughts on the Australian continent, taking first place in the entire 19th century. The lack of rainfall was followed by countless heat and starvation deaths in New South Wales. Drought in China. 2010 Catastrophic heat has covered not only China, but also parts of Vietnam and Thailand. It is considered one of the worst droughts in Southwest Asia of all time.

Climate Clues From The Past Prompt A New Look At History

Climate Clues From The Past Prompt A New Look At History 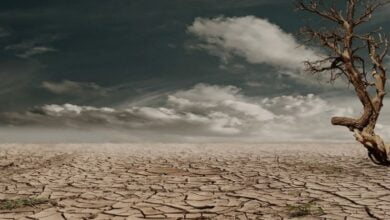