(ORDO NEWS) — Neptune ‘s largest moon , Triton, has a diameter of 2,706.8 kilometers, making it the seventh largest moon as well as the 16th largest object in the Solar System . Triton accounts for more than 99.5% of the total mass of objects that revolve around Neptune, including the ring system.

The following are ten more interesting facts about the huge natural satellite of Neptune, which was discovered by William Lassell on October 10, 1846:

Triton named after a sea god

Fittingly, the moon was named after Triton, son of the Greek god of the seas, Poseidon, whose Roman equivalent was Neptune.

However, the name Triton was officially adopted only many years after its discovery, and for a long time the largest satellite of the ice giant was known simply as “Neptune’s satellite.” After May 1, 1949, the satellite of Neptune urgently needed a name, as another moon was discovered, called Nereid.

Triton has a retrograde orbit

Triton is the largest moon in the solar system, orbiting its parent body in the “wrong” direction. In other words, Triton is moving in the opposite direction of Neptune.

Since Triton is already orbiting Neptune at a distance less than the distance from the Earth to the Moon, it is almost certain that tidal forces will cause the satellite’s orbit to decrease further, and this will happen at an increasing speed. 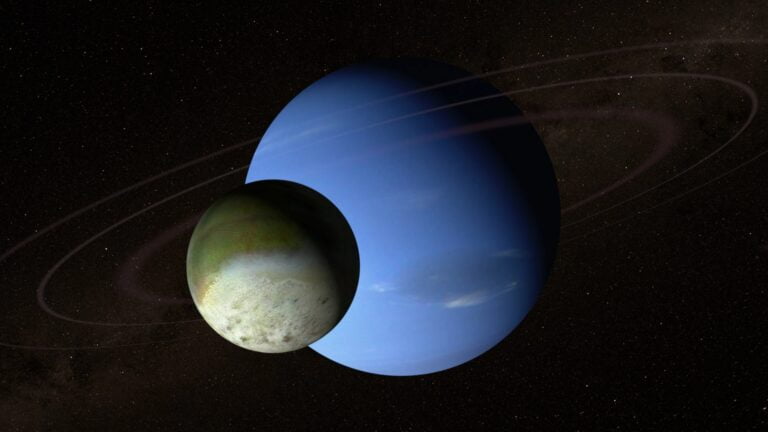 Computer simulations suggest that in about 3.6 billion years, Triton will cross Neptune’s Rosh limit, which is the distance at which an object orbiting a massive body will fall apart. In practical terms, the Roche limit is reached when the tidal forces overcome the gravitational forces that keep the body in a stable orbit.

It is expected that when Triton reaches this point, it will either fall apart into many tiny fragments, forming a complex system of rings, or simply split into large pieces that will fall on Neptune.

Since satellites that have retrograde orbits cannot form in the same region as their parent planets, the only explanation for Triton’s orbit is that it was captured from the Kuiper Belt , a ring-shaped “repository” of small icy and rocky objects left over from formation. solar system.

The Kuiper Belt extends inside the orbit of Neptune at a distance of about 50 astronomical units from the Sun, and since Triton is almost identical in composition, size, mass and temperature to Pluto (a known object of the Kuiper belt), the probability that in the distant past Triton was captured by Neptune is very high.

There are few impact craters on Triton

Only 179 impact craters have been accurately identified on 40% of Triton’s mapped surface, suggesting that the moon’s surface is constantly being updated.

In fact, studies have shown that, on a cosmic scale, Triton’s surface is almost “brand new” with an estimated age of no more than 60 million years. Moreover, there are very few elevations on the surface of Triton; the highest known mountain has a height of about 1000 meters.

There are ice volcanoes on Triton

The surface of the triton is covered with an ice crust, cut by rift valleys and ridges, which indicates ongoing processes of volcanic and tectonic activity. However, instead of hot lava, Triton’s volcanoes erupt water ice and ammonia, for which endogenous geological processes are responsible.

There are nitrogen geysers on Triton

In addition to ice volcanoes, Triton also has sublimated nitrogen geysers, sort of like geysers on Earth, spewing hot water.

Although there are not many nitrogen geysers on Triton, they are all located close to the subsolar point. This suggests that sunlight is heating reservoirs of subsurface frozen nitrogen to the point where it sublimates before breaking through the solid ice sheet covering the reservoir. 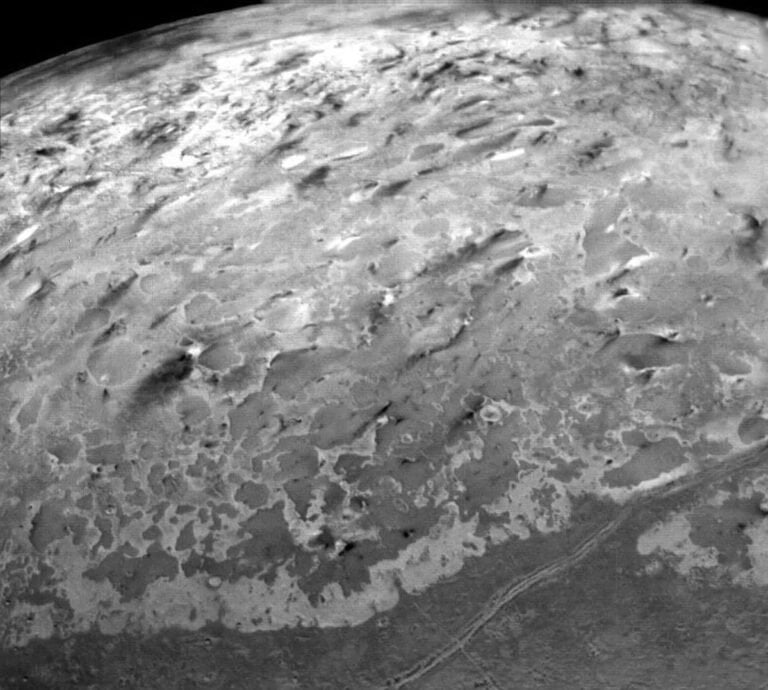 One of these geysers was recorded as throwing nitrogen gas mixed with ice and dust particles to a height of about eight kilometers. Based on this, it is estimated that each eruption could last up to one Earth year, releasing about 100 million cubic meters of sublimated nitrogen gas.

Triton has a unique terrain 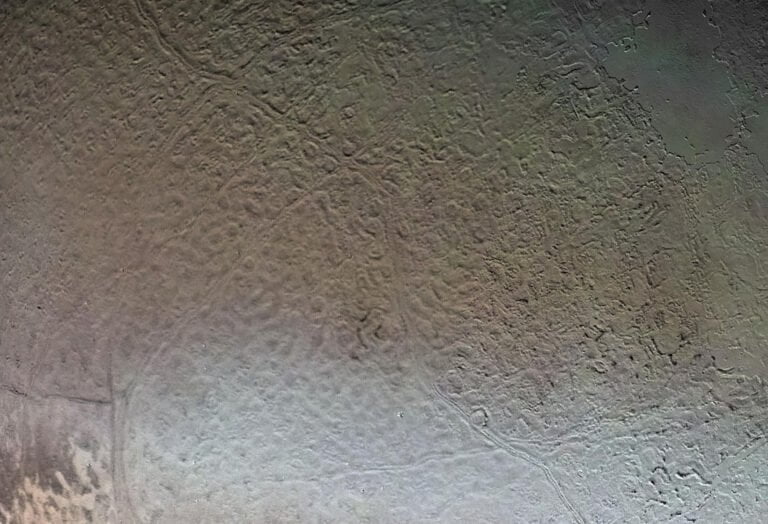 Although the formation is composed primarily of water ice, its origin and formation remain uncertain, but it is certain that this region (which likely covers most of Triton’s western hemisphere) is not the result of an impact.

Triton’s orbit around Neptune is almost perfectly circular with negligible eccentricity. Although there is some uncertainty as to how this happened in the relatively short history of the solar system, it is thought that factors such as gas drag from the debris disk may have greatly contributed to Triton’s orbital transformation.

Although only about 40% of the moon’s surface has been mapped, a known percentage is completely covered by a layer of frozen nitrogen, and it is highly unlikely that the remaining 60% of Triton’s surface will be anything else.

Triton’s surface is made up mostly of nitrogen ice, with water ice and frozen carbon dioxide adding to the mix. The layer of ice gives Triton a high albedo; the surface reflects 60% to 95% of the light falling on it, while our own moon reflects only about 5% to 18% of the light. 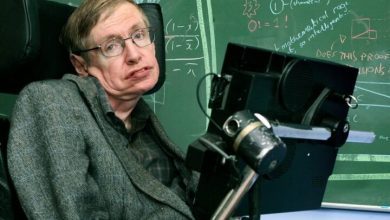