(ORDO NEWS) — Of all the strange objects that exist in the universe, black holes are without a doubt the strangest.

In 1971, the galactic X-ray source Cygnus X-1 was discovered in the constellation Cygnus, which took black holes from a purely theoretical phenomenon to a physical one. Nevertheless, black holes continue to retain their mystique and remain objects of science fiction.

For example, these mysterious objects are so dense that the singularity at the center of a black hole is a one-dimensional point that cannot be adequately described by the laws of physics as we know them.

In addition, by maintaining a safe distance from the black hole’s event horizon, the spacecraft can travel centuries ahead relative to Earth, although it would seem to the people on board that only a few hours have passed.

With that said, let’s dive into the topic and discuss with you 10 interesting facts about black holes.

How are black holes formed?

In short, a massive star collapses on itself. In more detail, a black hole is formed when a large star runs out of fuel and begins to collapse under its own gravity.

The result could be a white dwarf or neutron star, but if the collapsing star is massive enough, it can continue to shrink and eventually shrink to the size of a tiny atom, known as a gravitational singularity.

A black hole refers to a region in outer space where the gravitational force of a singularity is so strong that even light cannot escape its attraction.

What is inside a black hole?

The singularity at the core of a black hole can shrink down to smaller than an atom and eventually become an infinitesimal point in space containing infinite mass.

Inside a black hole, the force of gravity is so strong that the space-time surrounding the singularity bends (distorts) to infinity, and scientists are still busy looking for a good and working quantum theory of gravity to explain what is really going on inside these incredibly dense objects. 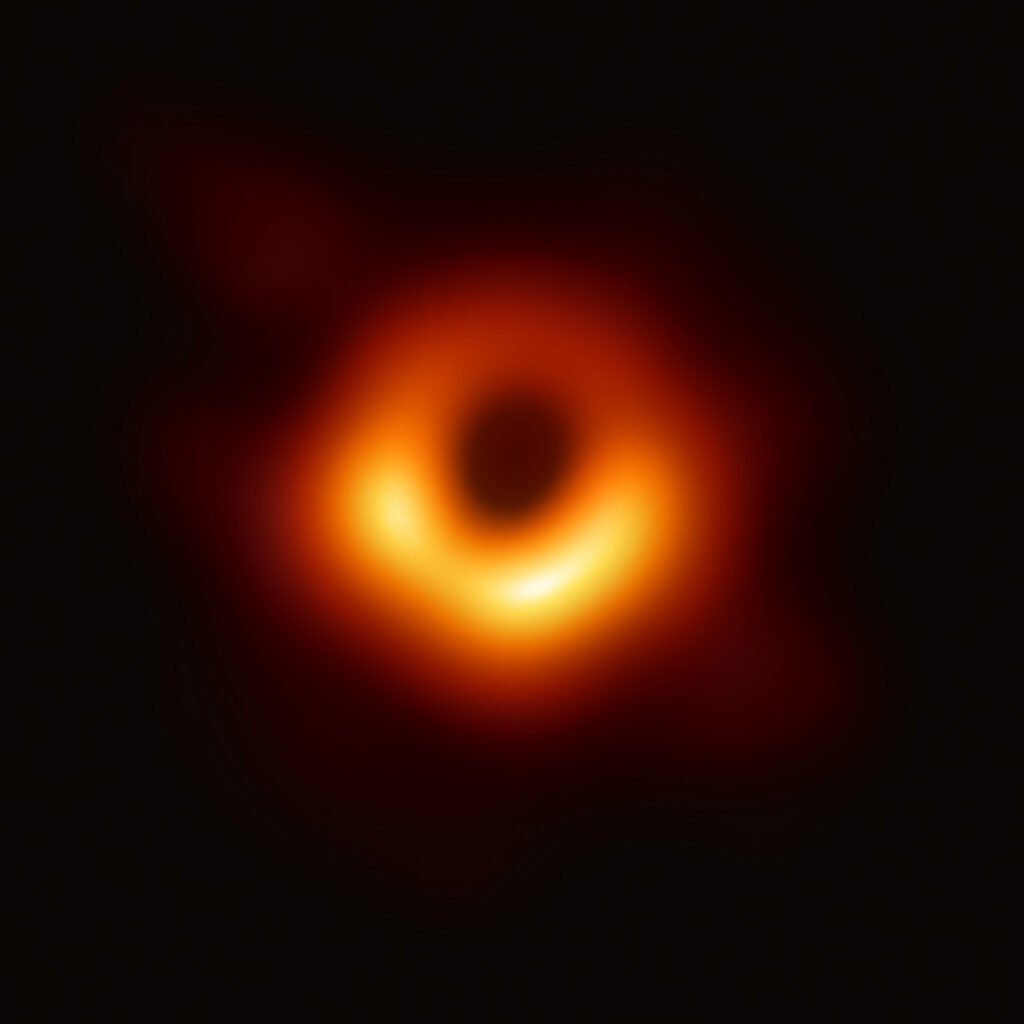 As the American theoretical physicist and winner of the 2017 Nobel Prize in Physics Kip Thorne says in his description of the singularity, this is “the point at which all the laws of physics break down.”

How do black holes affect spacetime?

Black holes distort space and slow down time. The mass of a black hole is so great, and the gravity of its singularity is so strong that, in accordance with Albert Einstein’s General Theory of Relativity, it actually distorts the space-time around it and even light cannot escape from its “embrace”.

The boundary beyond which light cannot leave the black hole’s gravity well is known as the event horizon, and its radius is called the Schwarzschild radius (detailed in the figure below).

As soon as matter and light rays pass the event horizon, they immediately “tip” and rush to the singularity, which becomes the only possible destination. From this point on, it is impossible to get out of the black hole.

Why do objects “freeze” near a black hole?

To an outside observer, it will seem that an object passing through the event horizon slows down, and then “freezes” in time and, in general, does not even pass the event horizon. This is because light takes longer to escape the black hole’s gravitational pull, and light signals do not reach the observer for an infinitely long time.

As time passes, light redshifts and dims as its wavelength gets longer. The light eventually disappears from the observer’s field of vision as it becomes infrared radiation and then radio waves.

Can you survive inside a black hole?

If his legs were closer to the center than his head, then he would begin to feel a strong pull that would first stretch him and then tear him into tiny pieces.

Remarkably, a person falling into a black hole will see events (distorted images) occurring beyond its event horizon, as light will continue to flow continuously from outside.

What is the gravitational pull of a black hole?

It is important to understand that the gravitational field of a black hole is the same as that of any other object in space of the same mass. In other words, it will not “suck” objects more intensely than any other normal star, and is more likely to simply “fall” into it if it gets too close to the event horizon. 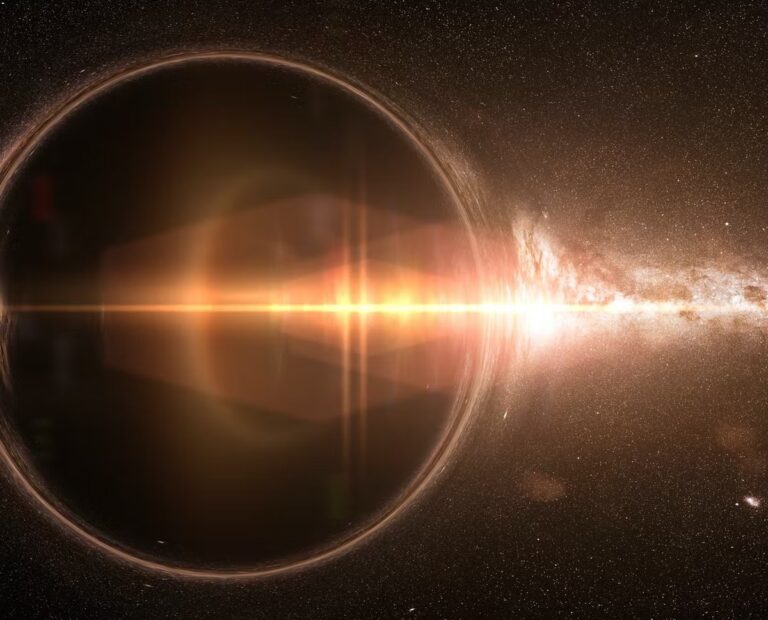 For example, if our Sun were replaced by a black hole of the same mass, then the Earth and other objects in the solar system would continue to experience the same gravitational force as before. The true nature of a black hole only becomes apparent when something passes the event horizon.

Are a wormhole (wormhole) and a black hole the same thing?

A traversable wormhole , also known as a Lorentz wormhole, Schwarzschild wormhole, or Einstein-Rosen bridge, is a theoretical “hole” in spacetime that allows “distance reduction” when moving from one point in spacetime to another.

On the surface, however, wormholes can have characteristics that are normally found in black holes, making it nearly impossible to tell one from the other.

In 1796, based on the work of Mitchell, a more developed concept of dark stars was proposed by the French mathematician, mechanic, physicist and astronomer Pierre-Simon de Laplace (March 23, 1749 – March 5, 1827).

Mitchell and Laplace suggested that there are objects in the Universe that are compressed to a sufficiently small radius, due to which the speed of light “escape” from their surface is higher than the speed of light itself, so such objects will be extremely dark.

Later, the term “frozen star” came to be used to describe the last phase of a star’s gravitational collapse, when light, unable to escape its surface, causes the luminary to appear frozen in time.

In the 20th century, the American theoretical physicist John Archibald Wheeler eventually coined the term “black hole” that we use to this day.

Today, physicists believe that black holes actually radiate a small number of particles, consisting mainly of photons, and therefore they constantly lose mass (energy) and shrink, which will eventually lead to their disappearance.

This as yet unconfirmed evaporation process is known as “Hawking radiation” after Professor Stephen Hawking , who proposed and developed this idea in 1974. 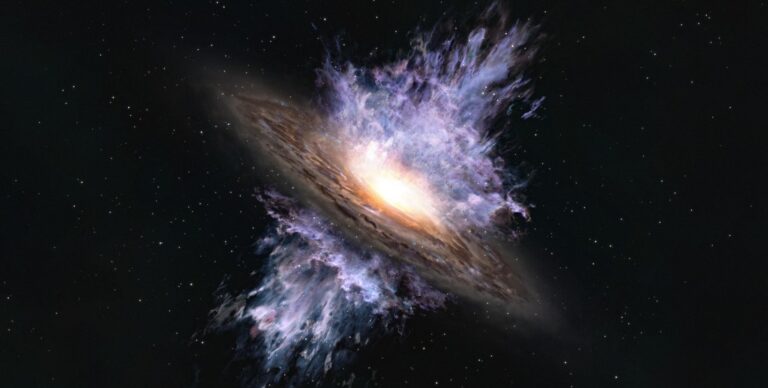 Even if Hawking radiation really exists, this process is staggeringly slow, and only the smallest black holes would have had time to significantly evaporate over 13.8 billion years (the age of the universe).

Which black hole is closest to Earth?

It is currently believed that at the center of most galaxies is a supermassive black hole, which, in general, provides the galactic structure.

For example, at a distance of about 25,640 light-years from Earth, at the center of the Milky Way , there is a supermassive black hole, Sagittarius A* or Sgr A*, with a mass of 4.2 million times that of the Sun.

However, the closest black hole to Earth (albeit not a supermassive one) is the recently discovered black hole in the HR 6819 star system, which is about 1000 light-years away.