(ORDO NEWS) — If we want to save our civilization, then one day we will be obliged to make Mars a second home for our species.

However, before you start packing your bags, we will tell you 10 curious facts about the Red Planet.

Place in the family

The fourth planet in terms of distance from the Sun and in seventh place in size (the diameter of Mars is 6779 km). This planet is almost 2 times larger than the Moon, but also almost 2 times smaller than the Earth.

The weight of any object that hits Mars will be 62% lower than on Earth. For example, if on your home planet your weight is 80 kg, then on Mars this figure will be slightly less than 50 kg.

Despite the fact that Mars is only 2 times smaller than the Earth, it is almost 10 times lighter than our planet!

Mars boasts two small moons Phobos and Deimos. Note that there is a very reasoned theory that says that in the past the Red Planet had 3 satellites.

Approach to the Earth

The core makes up just under 10% of the planet’s mass. The average thickness of the crust is 50 km. In the past, Mars was tectonically active and huge volcanoes erupted, but then something “broke”. What exactly? Scientists are looking for answers. 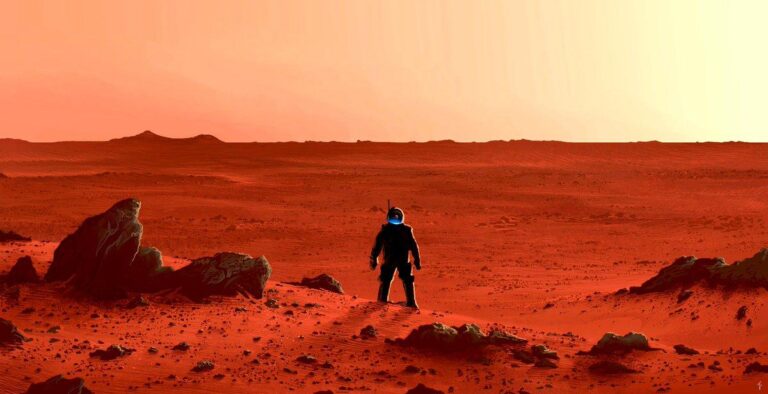 Earth’s atmosphere is 100 times denser than that of Mars. To fill the lungs with the same volume of oxygen at a time as with one breath on Earth, on Mars you have to breathe 14,500 times! Carbon dioxide accounts for almost 96% of the volume of the atmosphere.

At the equator, the temperature in summer rises to +30 Celsius, and in winter at the poles it drops to -127 degrees.

Water is plentiful on Mars, but it is in a frozen state. By the way, this is a good sign for future colonists who will not have to “drag” water from the Earth.

Can you live without protection?

If you were on Mars without protection, you would live for about … 2 minutes! Radiation, low temperatures and an atmosphere unsuitable for breathing will do everything to destroy life.

A huge amount of water found under the surface of Mars

Gloomy forecasts for the colonization of Mars announced

A huge amount of water found under the surface of Mars

Gloomy forecasts for the colonization of Mars announced